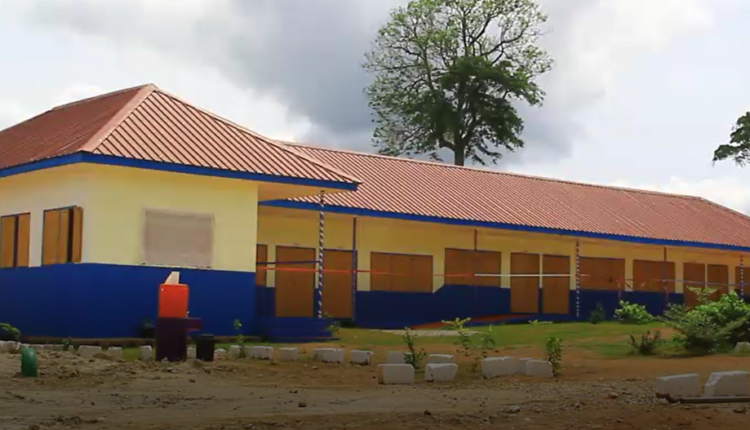 From abandoned poultry farm to modern classroom; the impact of the Jackson Family in Danyame-Kwaem

Imagine staying home as a kid until you were 12 years before your parents made any effort to enroll you in school due to distance.

How about trekking a round trip of 14 kilometers daily to attend school at that tender age?

This may sound ridiculous, but that was the plight of children at Danyame-Kwaem, a settler community near Obenimase in the Asante-Akim Central Municipality of the Ashanti Region, and as a result, access to education was not a priority for many parents who considered their wards too young to make that sacrifice.

Only a few of them would arrange for their children to live with others in town or give out such children to family members elsewhere to be able to attend school, while they concentrated on their farming business.

Danyame-Kwaem is about seven kilometres from Obenimase and the inhabitants are predominantly migrants from the Northern part of the country, who have settled there purposely for cocoa farming.

As caretakers of the farms, their primary focus was to take good care of the farms to have their share from their landowners under the “Abunu” system.

Education of their children did not matter as long as they made progress in achieving their purpose of migrating to the south.

But, the fate of the innocent kids would change, following a visit by a Reverend Minister of the Presbyterian Church of Ghana (PCG) in 2016.

Rev. Emmanuel Dela who is the Minister in charge of the Victory Congregation at Obenimase, was in the community to visit some of his church members.

He, however, noticed children in the community did not attend school and the reason given was that they could not trek the long distance to Obenimase because of their age.

“This sad reality got me thinking and I told myself we need to figure out something to address the problem,” he told the Ghana News Agency (GNA) in an interview.

Rev. Dela started engaging leaders of the community on how to start a Kindergarten (KG) in the community so that by the time they were matured enough to access mainstream education, they would have had a fair idea about school.

After a series of meetings and deliberations, they settled on the structure of an abandoned poultry farm to serve as a make-shift classroom for the kids.

Two Senior High School graduates who had also migrated from the North to engage in cocoa farming accepted to teach the children.

So for the first time in the history of the community, children could converge at the poultry farm each day to have a feel of formal education, however un-conducive the environment was.

With only two classrooms available in the structure, the two teachers were compelled to handle two streams of classes within the same classroom as the pioneers progressed from KG 1to class 2.

So in effect, one of the teachers handled KG 1 and 2, while the other handled classes 1 and 2.

But another ‘divine’ visit by Mrs. Theodosia Jackson, Principal of Jackson College of Education (JCE) in 2018, was the turning point of a hopeless situation begging for a turnaround.

Mrs. Jackson had visited Rev. Dela at Obenimase, but was told the Rev. Minister had gone to Danyame-Kwaem.

For some unexplained reasons, Mrs Jackson decided to follow him up to the said community only to discover the deplorable conditions under which the children were studying.

“I felt bad when I saw the children because they are also Ghanaians and deserve better,” she told the GNA.

Since then, Mrs. Jackson who is also a renowned educationist with about 40 years’ experience in the education sector, adopted the school and provided the needs of both the children and the two teachers.

With the support of her husband, Prof. Ebenezer Jackson, she provided each of the over 200 children with uniform, footwear, school bag, exercise books, pencils, erasers and other teaching and learning materials.
The teachers also received some stipend from the family every month as motivation.

The Jackson family also started a school feeding programme and ensured regular supply of staple foods such as rice, gari, beans and other food items to prepare one hot meal for the children each day.

As if that was not enough, Mrs. Jackson gave the two teachers scholarships to study at JCE to build their capacities to be able to teach the children as professional teachers.

The scholarship was later extended to nine other Senior High School (SHS) leavers in the community, bringing the total number to 11.

Despite all the support given the school, Mrs. Jackson realized it was imperative to build a permanent classroom block to accommodate the children as the population kept growing.

She, therefore, requested the community to allocate land for a new classroom project, and through the efforts of Rev. Dela and the leadership of the community, they secured land for the project about two kilometers from the abandoned poultry farm.

With their own resources, the Jackson family built a seven-unit classroom block from scratch to accommodate KG to class six pupils without requesting a dime from the government or the community.

Not only did the project come with the head teacher’s office, staff common room, a borehole, washroom facilities and kitchen, but each of the classrooms was furnished with modern furniture, some of which were imported.

At a colourful ceremony to unveil the school, members of the community could not help but praise the Jackson family for bringing hope to their children when they least expected.

They just could not stop blessing Mrs Jackson and Rev Dela for their selfless act, especially when they were not even natives of Asante-Akyem.

The ceremony was attended by key stakeholders such as the Chief of Obenimase and his elders, representatives from the Municipal Education Directorate, parents, Assembly Members and the Member of Parliament, Mr. Kwame Anyimadu-Antwi.

Also in attendance to support the Jackson family was Mr. Osei Assibey Antwi, the Kumasi Metropolitan Chief Executive (MCE).
They took turns to pay glowing tribute to the Jackson family for their invaluable contribution to education in the community.

They believed the gesture would make significant impact not only on the lives of the children, but the entire community which would eventually benefit from the children’s education.

Mrs. Jackson said education was the foundation of most of the economic powers who could not boast of the numerous natural resources at Ghana’s disposal and called for investment in the country’s education system for a better future.

She said the progress of the nation largely depended on the kind of education given to the citizenry, adding that there should be a deliberate effort to bridge the yawning gap between remote communities and urban centres in terms of educational infrastructure.

She urged parents and other stakeholders to take good care of the building to prolong its lifespan and also appealed to the government to extend the school feeding programme to the school for her to turn her attention to other underprivileged communities.

Grateful for the solidarity in the face of this…

Francis-Xavier Sosu: CJ must resign or step aside to…