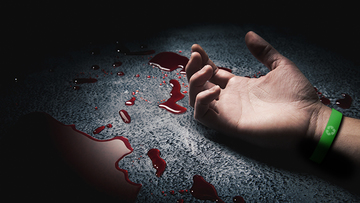 The Tarkwa Nsuaem District Police Command has picked up a 35-year-old man, whose name has been given as Fofoe, for allegedly selling his six-year-old daughter to be killed for ritual purposes in Dompem-Pepesa in the Western Region of Ghana. It is also alleged the supposed ritualists, paid an amount of GHC 3,800 in exchange for his daughter.

Skyy News in the early hours of Friday, 13th November 2019, broke a story where, a six-year-old girl was beheaded by unknown assailants at Dompim-Pepesa in the Tarkwa Nsuem Municipality of the Western Region.

Police investigations into the unfortunate incident has revealed, the father (Fofoe) sold her daughter to the unknown ritualist who subsequently murdered the young girl, and removed her tongue and heart. They bolted and left the lifeless body of the young girl in a bush nearby.

The prime suspect, Fofoe, aged 35, was arrested at his hideout on Saturday December 14 2019, and upon further interrogations, mentioned the name of “Taller” as his accomplice. He has therefore admitted, he and his accomplice sold his daughter.