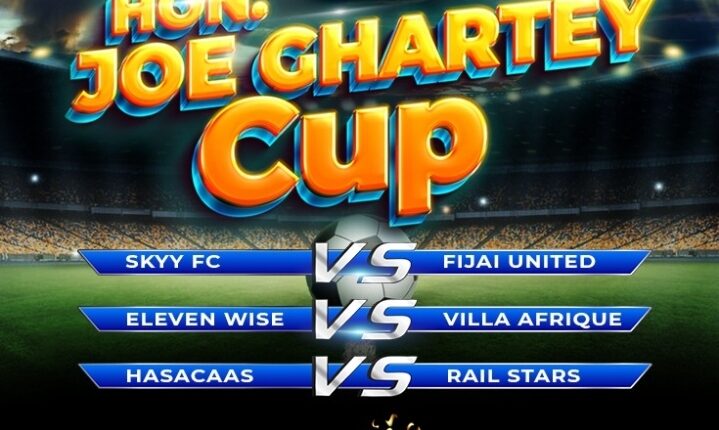 The Maiden Edition of the Joe Ghartey Cup to be played on Friday 12th of August marks the official Commissioning of the Essikado Astro Turf.

Each participating team is entitled to a signing-on, fees of GH1,000 and a lunch pack including water per number of registered players and confirmed by headcount to be present.

Regulations for the Joe Ghartey Cup are as follows:

Registration of Players and two sets of Jerseys closes at 5pm on eve of day one of competition. Maximum of 5 Players per team can be added to permitted to added after first round of competition by duly applying and processing with Secretary of Committee managing tournament 30 minutes before start of second round.

Each Player will be assigned same unique identity jersey number throughout this Tournament.

Teams must report at Match venue 40min before start of scheduled match.

Team sheet of 20 Players and not more than 5 officials for a match must be submitted to the Match Commissioner 20 minutes ahead of the game for inspection of Players to be conducted.

Players and Referees will be given not more than15mins to warm up before each game.

In this maiden edition, each participating team is entitled to a signing on, fees of GHS1,000 and lunch pack including water per number of registered players and confirmed by head count to be present.

First round of 3 Matches will be on knock out basis.

Duration per match will be communicated by Match Commissioner before kick off.

Straight Penalty shootout outcone will be used to decide

In this maiden edition, the 3 teams that progresses to the second round will play two matches each. A win in regulation time will give Winner team 3 points tally. A draw will give each team 1 point.

Two yellow card offences or a red card offence in a match will lead to straight expulsion.

Two yellow card cumulative offences will lead to Player not qualified to play in next Match, same as a red Card offence.

At the end of each Match, the Moat Valuable Player (MVP) per performance and conduct will be announced which will feed into honouring of overall MVP.

Golden Boots award will be given at the end of the tournament.

Golden Gloves award and Most Outstanding Young Talent Award will be given.