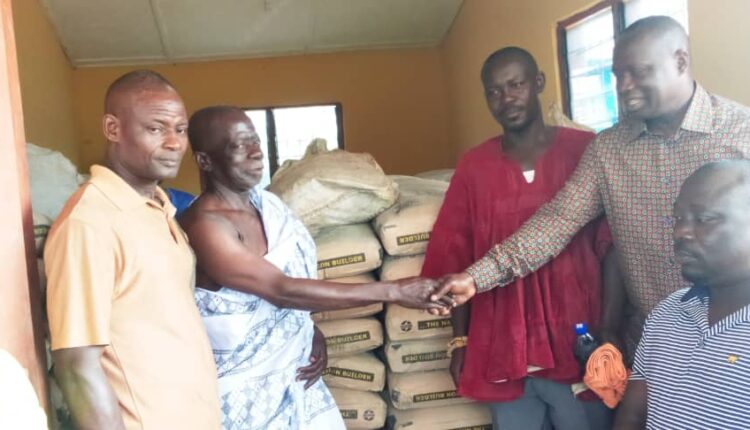 Hon. Armah Buah added that he is committed to connecting some farming communities that are not benefiting from electricity in the area onto the National Grid as part of measures to ensure security during the night and improve standard of living.

The NDC MP charged the communities to ensure effective use of the cement to complete the renovation on time and assured to reward with furniture to the first runner-up in the mini competition.

Pupils at Santasu D/A primary school are studying under poor conditions. The pupils at the lower primaries (from primary One-Six,) share a wretched and caked-mud building which is almost on the verge of collapsing with part of it roof hanging.

They are also in need of an ICT lab for studies, Mr Joseph Nyansu, the Headmaster of Santasu D/A primary school, speaking at the mini durbar for the donations lamented about the deplorable state of the classrooms which has a total of 450 pupils.

He said that some of the walls have fallen, and all the classrooms are dusty and open. He added that in some classes, some children often sit on the bare floor during lessons, whilst 4 pupils share a wobbly desk in others.

The Odikro of Wereko community expressed his heartfelt gratitude to Hon Emmanuel Armah Buah and prayed for God’s guidance and blessings for him in order to continue with the good works to better the lot of the people in the area.

According to the caretaker Chief, the track record of achievements by the Ellembelle MP qualifies him as the right person to serve as a running mate for the NDC party to secure victory for the party in 2024.

He describes the MP as “Second Kwame Nkrumah” due to his unprecedented transformation the MP has brought to Ellembelle district.