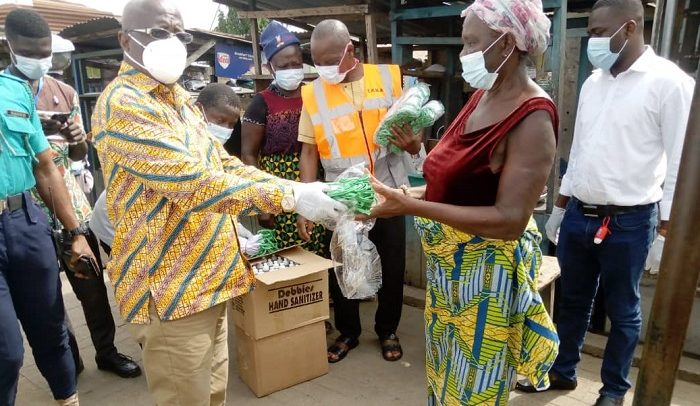 The COVID-19 Task Force in the Effia-Kwesimintsim Municipal Assembly (EKMA) has arrested about 106 residents who failed to comply with the COVID-19 safety protocols, especially the wearing of nose masks in the Municipality.
Among the number of arrested residents, six people were sent to the Kwesimintsim Police station to be prepared for prosecution, while 100 were made to desilt gutters after which they were asked “to go and do the right thing”.
The areas, where many of the people flouted the protocols leading to their arrest are, Kwesimintsim, Apremdo, Effiakuma No.9, Effiakuma New-Site, Assakae and TTU Main Campus area.
Mr Henry Kwofie, Municipal Coordinator for the National Disaster Management Organisation (NADMO) who doubles as the Chairman of the COVID-19 Task Force for EKMA told the GNA that to ensure efficiency in the fight against the spread of the disease they had to institute three teams.
The three teams he mentioned as Education Team led by the National Commission for Civic Education (NCCE) to embark on sensitization, the Ghana Health Service Team (GHS) to provide health support and the Task Force to implement and enforce compliance of policies.
He announced that the Teams and the Assembly had met with driver unions, market women and traders to brief them about the state of the disease in the Municipality and the measures taken to address the spread of the disease.
Mr Kwofie said the Assembly has so far distributed a number of nose masks, alcohol-based hand sanitizers and Veronica buckets to market women and driver unions as a means to stem the spread of the disease.
He expressed concern that some recalcitrant market women have decided to flout the safety protocols by not wearing their nose masks and urged them to desist from the behaviours to save lives.
He also noted that many of the mobile money vendors in the Municipality did not have sanitizers and Veronica buckets around them and urged them to make some available so that they could use after handling money.
He recounted a situation where the Task Force had to stop a funeral because they were flouting the directives as given by the President, while some bars and pubs were cautioned to operate within the given protocols.
Mr Kwofie therefore encouraged all bar operators to follow and make sure their customers adhered to the physical distancing rules and regularly disinfect tables, chairs and door handles after usage by customers.
He pointed out that by dint of hard work and commitment to the fight against the pandemic, the number of cases have reduced and urged drivers in particular to make sure that their conductors and passengers wear their nose masks before boarding vehicles.