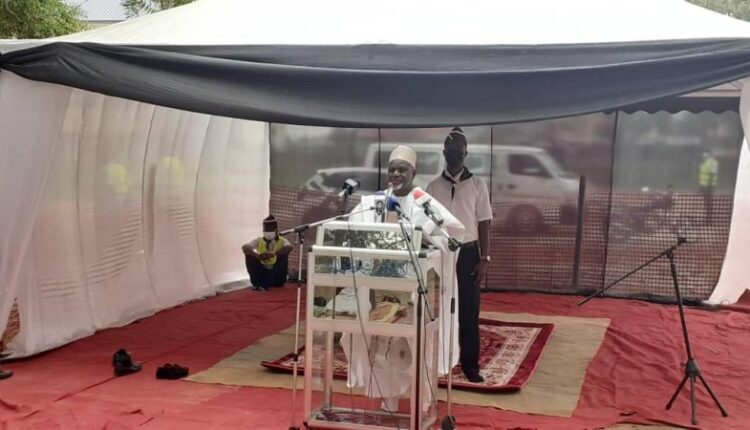 Alhaj Maulvi Mohammed Bin Salih, the Ameer and Missionary-in- charge of the Ahmadiyya Muslime Mission has called on Ghanaians to continue to pray for lasting peace in the country.

“Let us pray for the President and all members of his team that Allah may protect them and grant them the needed wisdom to steer the affairs of the country in an effective and efficient manner,” he said.

Alhaj Salih made the call on Tuesday in a sermon to celebrate this year’s Eid-Ul-Adha in Accra.

The celebration honours the willingness and commitment of Hazrat Abraham to sacrifice his son Ismail as an act of obedience to God’s command.

“Eid-Ul-Adha is a means, not only of moral and spiritual upliftment, but also a reminder of the need for sacrifice in nation building and personal development,” he added.

The Leader told Muslims that as they retired to their homes to carry out the slaughtering of animals as a sacrifice, they should not do so only as a formality, but as a practical demonstration of obedience and humility to their Creator.

He said the country needed peace for growth and development, adding that it was the wish of the Ghanaian society to see the country making progress.

“There is a growing tendency of disrespect for religious emotions of each other in the country occasioned by unguarded provocative statements which does not auger well for the maintenance of peace,” he noted.

Alhaj Salih said it was unfortunate that crime was progressively rampant, truth disappearing with unimaginable speed, equity, and deliverance of justice on the verge of extinction.

Those attitudes, he said, mitigated against peace such that peace of the country would be hanging on the feeble string of hope that justice would prevail.

Alhaj Salih, therefore, urged Muslim leadership to be united and put their act together to provide the needed alternatives to help solve the challenges facing the country.