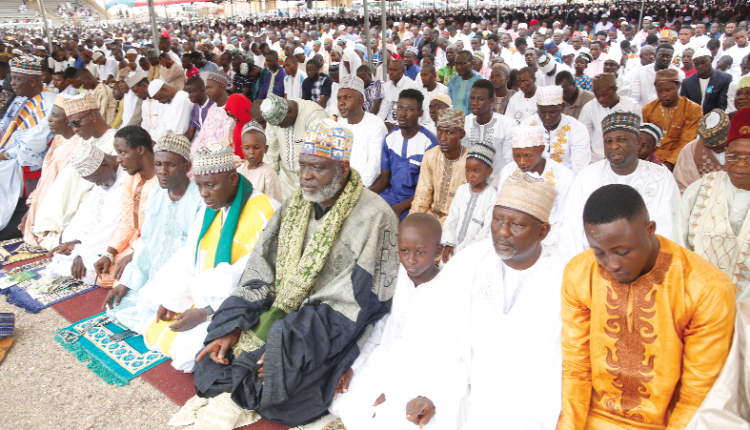 The Festival of Eid Al-Fitr or the Festival of Fast-breaking is an important religious day celebrated by Muslims worldwide to mark the end of Ramadan, the Islamic holy month of fasting.

For Muslims around the world, the day which is one of the most important festivals on the Islamic calendar is celebrated to mark the end of the 29 or 30 days of dawn-to-sunset fasting during the entire month of Ramadan.

Fasting is one of the five pillars of Islam and Muslims believe that it was during the month of Ramadan that the text of the Qur’an was revealed to the Prophet Muhammad (SAW).

As the date of Eid depends on the sighting of the moon, there may be variations in the exact date that is celebrated around the world. Normally Eid al-Fitr is celebrated during the first three days of Shawwal, the 10th month of the Islamic calendar, just after Ramadan.

In most countries around the world, the day is marked as a public holiday.

Muslims celebrate Eid Al-Fitr with prayers called “Salat Al Eid” in Arabic. There is no audible call to prayer for the Eid prayers. Muslims will gather in mosques or open spaces and offer two units of prayer, called “Rakat”. The prayers are followed by a sermon, in which the Imam asks for forgiveness, mercy, and peace for every being across the world.

It’s a tradition to wear new clothes and on the way to the mosque, eat something sweet such as a date, and recite a small prayer called a takbeer.

Other key elements of the Eid Al-Fitr celebrations are giving money to the less fortunate families (known as ‘Zakat al-Fitr’) depending on the possessions one has, for them to enjoy the festivities as well, sending Eid greetings, feasting with families, and sometimes visiting the graves of relatives.

For many Muslims, Eid al-Fitr is a festival to show gratitude to Allah for the help and strength He gave them throughout the month of Ramadan to help them practice self-control.

The phrase commonly used by Muslims as a greeting on this day is “Eid Mubarak”, meaning ‘blessed festival’, with the response “Khair Mubarak”, which wishes goodness on the person who has greeted you.

The first Eid al-Fitr was celebrated in 624 CE by the Prophet Muhammad (SAW) and his companions after their victory in the battle of Jang-e-Badar, a turning point in Muhammad’s (SAW) struggle with his opponents among the Quraish in Mecca during the early days of Islam.

This year’s Eid Al-Fitr celebrations start from the eve of May 1, through to May 3, and some Muslim have expressed their expectations, excitement and given some advice to Muslims in the country

Dr Sheikh Amin Bonsu, National Chairman of the Ghana Muslim Mission (GMM), in a message, urged Muslims to maintain their new state of being by constantly getting closer to Allah through devotion to prayers as they exit the month of Ramadan successfully.

He asked that Muslims continued with their good deeds, read the Holy Quran frequently, show more love to the poor and needy by taking care of their needs and be peaceful wherever they found themselves.

Sheikh Bonsu advised that Muslims establish good relations with all manner of persons as exemplified by the Holy Prophet Muhammad (Peace Be Upon Him) and also use this year’s Ramadan and Eid -Fitr as a rallying point to stay united and focused on spreading the good message of Islam to the rest of the world.

“As we pray for peace and blessings for our dear nation, Ghana, we urge educational and corporate Institutions to ensure that Muslims are granted equal rights and the freedom to practice their religion as enshrined in the 1992 constitution of the Republic of Ghana”, it stated.

He entreated the youth to celebrate the occasion humbly and solemnly with the fear of Allah.

Imam Nurudeen Attukwei Quaye, the Greater Accra Regional Imam of the GMM, also noted that the month of Ramadan had shaped the way of thinking and reasoning, emotionally thought Muslims how to react mentally.

He, therefore, urged that Muslims practice the lessons drawn throughout the fasting period in daily activities.

Imam Quaye advised Muslims not to go overboard during the Eid celebration but rather ensure it falls within the tenets of Islam.

He more importantly asked that people show love to the needy during this period.

Have the masks gone too soon?