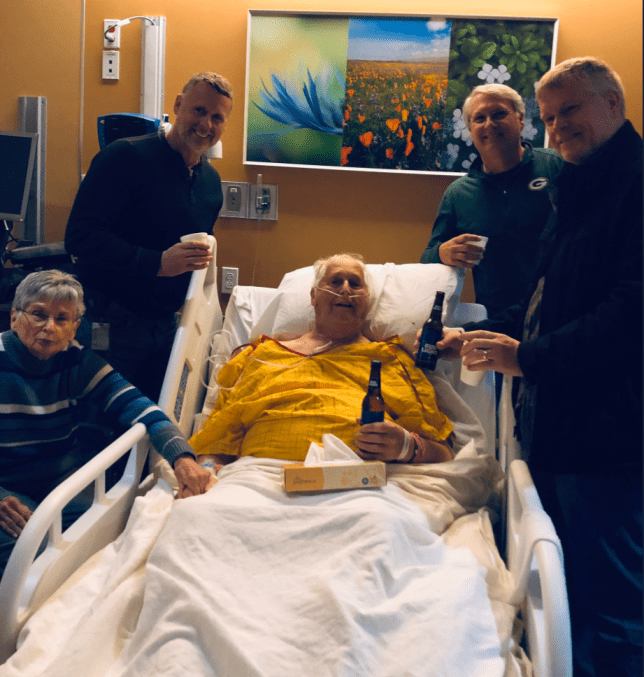 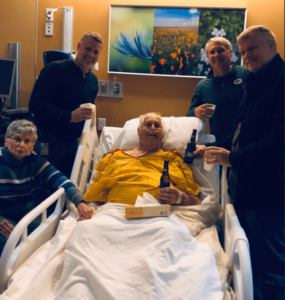 This tear-jerking photo shows a father fulfilling his dying wish to have one last beer with his beloved sons and grandsons. Norbert Schemm, 87, spent his final moments alive sipping a beer with his loved ones in a Wisconsin hospital. A photo of the touching family reunion was posted to Twitter by Norbert’s grandson, Adam Schemm, and the tweet has sparked strangers around the world who took comfort in the post and replied with deathbed photos of their relatives. Adam, whose November 20 post has been liked nearly 330,000 times, said he was initially hesitant to put the picture online. ‘My grandpa had been relatively healthy over the course of his life but it was on the Sunday last week while he was in hospital that they realized it would be the end.’

Adam continued: ‘ He called his grandchildren to tell us on the Monday. We took the picture Tuesday night and then he died from stage four colon cancer on Wednesday.’ ‘My dad told us that grandpa had wanted a beer and now when I look at that picture it gives me solace… It’s actually helped us with our grief. It’s comforting to see that my grandparents and their children were all together in his final moments,’ he said. Adam said he and his family have since been tracking the post that has been spread by thousands who shared it. ‘It seems to have tapped into a sense of community and clearly is a moment lots of people relate to. The comments have been so kind and we’ve seen pictures of people toasting bottles of beer in his honor,’ he said. One of the people who Schemm’s image resonated with was Ben Riggs, of Indianapolis, who posted a photo of his grandfather, 86-year-old Leon Riggs, as he enjoys a final cigar and beer.

why email marketing has to be part of your business growth...

6 Accessories to Be the Best-Dressed Guy in the Room

PROVEN WAYS TO HAVE HEALTHY SKIN ALL THE TIME.