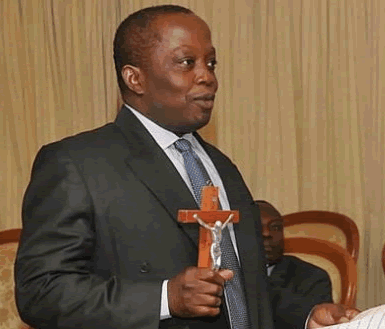 Anti-corruption campaigner, Vitus Azeem says the Auditor General, Daniel Yaw Domelevo may end up as his predecessor who was equally asked to take a mandatory annual leave. Mr. Azeem recounts that there exist a precedent, as alluded by the President in his letter directing Mr. Dumelovo to take the leave, the eventual disappointment of his predecessor during the late Prof. Atta Mills’ administration.

Commenting on this development on Mr. Azeem questioned the motive behind this directive by the President.

“Were they waiting for an opportunity.. like the elections that is pending to push him out of the way so that the good works that he’s been doing will not be possible?

“There’s an example that the President has given…he was the one that was pushed out by the Mills’ administration….so is it a tit for tat?” he asked.

The opposition National Democratic Congress (NDC) seemed to be amused by this development, especially at a time they had been waiting for an inquiry into a whooping GHC280.3 million allocation for the Coronavirus alleviation Programme.

The NDC tweeted; “Not long ago, we petitioned the Auditor-General to carry out a special audit into the expenditure of GHC280.3 million allocated for Coronavirus Alleviation Programme. Government urged him to disregard our petition. Today, President Akufo-Addo fired the Auditor-General”

In a letter signed by the Director of Communications, Office of the President, Eugene Arhin, the Auditor General has been directed to take an annual leave, which had accumulated for approximately one hundred and twenty-three (123) working days.

The President referenced sections 20(1) and 31 of the Labour Act, 2003 (Act 651) as justification for the directive. He further noted that such directives are not out of place as there exist a precedent to the matter.

“It would be recalled that, on 9. April, 2009, the 3rd President of the 4. Republic, His Excellency the late Prof. John Evans Atta Mills, directed the then Auditor-General, Mr. Edward Dua Agyeman, to take his accumulated annual leave of approximately two hundred and sixty-four (264) working days”

You do not have the mandate to investigate me – AG Domelevo calls EOCO’s bluff.

Local refineries need to be certified, we will support in that...