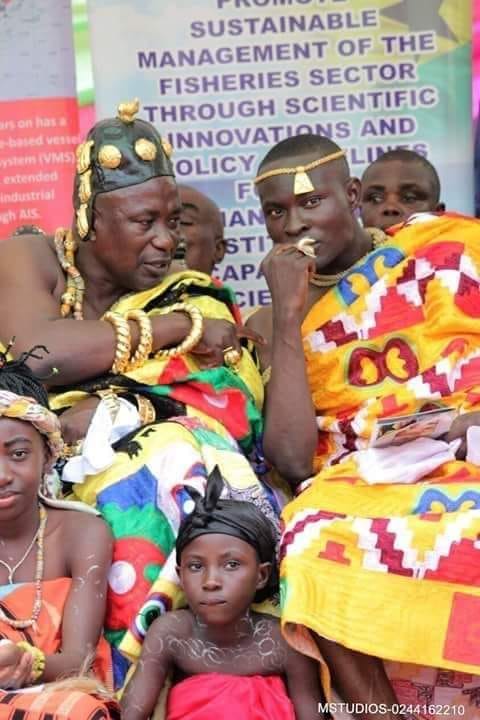 Vice President of the Western Region House of Chiefs, Awulae Amihere Kpanyinli III has condemned in no uncertain terms the brutality and violence meted out at the Paramount Chief of Lower Dixcove, Nana Kwesi Agyeman IX last Monday dawn.

Awulae Amihere Kpanyili III who is also the overlord of Eastern Nzema Traditional Area cried that the act was barbaric and a disrespect for the rule of law, customs and traditions of the Ghanaian community.

In a rather sadden tone as he addressed the President of the Republic of Ghana, H.E Nana Addo Dankwa Akufo Addo, at the commissioning of the New Gas Complex for the Ghana National Gas Company Limited in A.B Bokazo today prayed that such act must never entertained nor allowed for retaliation.

“What happened in Dixcove is not something any of us thought could have happened. We pray that there would be peace… Whoever that would do anything to retaliate, would never come to think of it.  That, we would uphold the law, that our difference would be settled within the law. But fights and attacking each other is not the way to go” he cried.

It is alleged that the assailants on Nana Agyeman IX were from Upper Dixcove, who sought to punish him for breaching a restrictive order by the court, by installing a new chief in Tourome, a rural community “traditionally” under the Upper Dixcove Paramouncy. The two paramouncies; Upper and Lower Dixcove Traditional Areas have been in dispute over ownership of the Tourume village for more than a decade.

A presser has also been released by the office of the Acting President Awulae Amihere Kpanyili III, to appeal to government to set up a committee to investigate and bring to some finality a resolution to the feuding paramouncies.

He also urged the police to expedite investigations and fish out the perpetuators of such a heinous crime.

Dixcove Violence: Statement by Acting President of the Western Region House of Chiefs by Abraham Mensah on Scribd