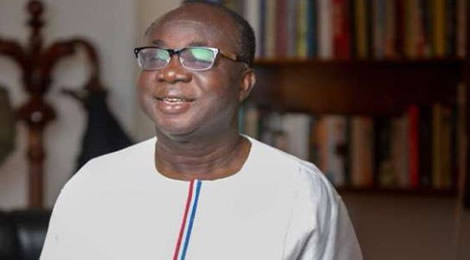 National Chairman of the New Patriotic Party (NPP) Freddie Blay, has been acquitted and discharged of contempt charges brought against him by the Commission for Human Rights and Administrative Justice (CHRAJ) by an Accra High Court.

CHRAJ contested that, on July 6, 2018 the Coalition of Social Justice brought a formal complaint, requesting the Commission to investigate Mr. Blay for corruption in respect of his role in the purchase of 275 buses for the 275 constituencies of the ruling party, the NPP.

CHRAJ says after determining that it had the constitutional mandate to investigate the matter, it commenced investigations and subsequently wrote to Mr. Blay on August 20, 2018.

In it’s motion in court, CHRAJ stated that on August 20, 2018, it wrote to the respondent to submit his comments on the allegation “within 10 working days, unless he admits to the allegations”.

“The said letter was duly delivered to the respondent but he failed, refused/and or neglected to oblige the commission with his comments as requested,” it stated.

According to the motion, Mr. Blay ignored this letter too.

On January 21, 2019, CHRAJ subpoenaed Mr. Blay to produce certain documents before it by Monday, January 28, 2019. This motion was also ignored according to CHRAJ.

CHRAJ says when this motion was also ignored by the respondent, it wrote a third latter on April 11, 2019, giving him a final reminder to present the documents before the committee.

Again, Mr. Blay did not respond, according to the motion.

“The respondent, by his conduct, has demonstrated that he has no respect for the law and will not obey the lawful request of the commission unless compelled by the authority of this honourable court,” CHRAJ stated in its motion.

However in it’s ruling, the court determined that CHRAJ did not provide substantial evidence of serving Mr. Blay the writ of subpoena, asking him to appear before it. Freddie Blay has subsequently been acquitted and discharged.

EC will compile a new register, boycott that one too- WR NPP Chair dares NDC

The one decision you Can make to save your marriage

5 best tips to make a girl fall in love with...

Scientists Explain What Everyone Should Know About Eating Butter