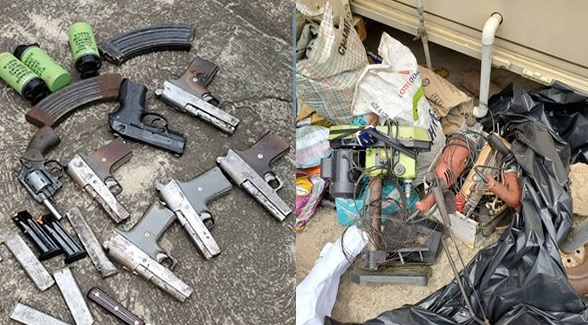 Fraud and Security Analyst, Richard Kumadoe has scorned government’s communication on the supposed coup attempt that was foiled by the Defence Intelligence, CID and Bureau of National Investigations.

The Communications Ministry announced that a 15 month surveillance by the security team webbed three suspects to the said crime; Dr Frederick Yao Mac-Palm and his two accomplices, Ezor Kafui (a local weapon manufacturer) and Bright Allan Debrah Ofosu, alias BB or ADC. Several arms, explosive devices and ammunition were retrieved at their hideouts in Accra and Bawaleshie near Dodowa.

Commenting on this development, Mr. Kumadoe said he is unconvinced by the report by the security agencies, and called on government to clarify issues.

“The old folks who have witnessed this will say you are creating fear and panic. People can die. The business community could be agitated. There could panic withdrawal, you are also creating the appetite for people who want to do coup to take their weapons and try the system.

“…what we are reading from the process is a little bit scanty, and I think government has more that we don’t know” he said.

Mr Kumadoe stressed that threats of this nature are prevalent, and that government should have exercised some restraint in communicating it.

“There’s nothing strange or unusual about it. But I don’t know motive and reason why government brought it out. Otherwise you are creating a scenario that more people will begin to ask questions” he stated.

The country has for the past years suffered counts of coup attacks one that reinforced actions for a democratic governance in 1992.