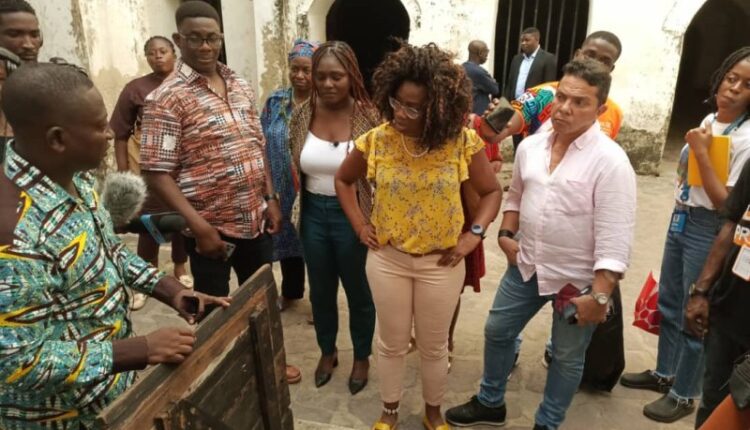 Their visit, dubbed: “The Return Mission” is to advance and promote the rights of People of African Descent.

When the team was asked to observe a minute silence inside the male dungeon in remembrance of the victims of the transatlantic slave trade, spontaneous tears trickled down the eyes of Madam Campbell Barr.

Her husband, who equally looked dejected by the accounts of the horrifying conditions in the dungeon, consoled her in a warm embrace.

Throughout the tour, Madam Campbell Barr appeared sober and heartbroken by the ordeals of the African captives who where subjected to inhumane treatment in the dungeons for months before they were shipped to Europe and America.

Mr Clifford Ashun, the Central Regional Director of the Ghana Museums and Monuments Board, who conducted the team around the facility, gave a chilling account of how the rights of the captives were crushed throughout their tortuous incarceration in the dungeons.

“People are made to lie side-by-side, unable to move and unable to sit up with their hands and legs in chains and shackles.

There were instances one could not get his own hand to clean his own mouth and many died because of the way they were closely packed,” he narrated.

Dr Kanem and Madam Campbell Barr laid a wreath each inside the dungeon in honour of the souls of African ancestors lost during the slave trade.

“We do this for the peace of their souls and for the reminder that we have to fulfill the work for our people not only here in Africa but for our daughters and sons of Africa all over the world,” Madam Campbell Barr said.

The Elmina Castle was first built in 1482 as a Portuguese trading settlement. Occupying an area of 91,000 square foot, the Castle was one of the principal slave depots in the transatlantic slave trade for more than three centuries.

The Castle has now been designated as a UNESCO World Heritage site that attracts tens of thousands of visitors every year.

Earlier in the day, Dr Kanem and Madam Campbell Barr visited the Assin Manso Ancestral Slave River Site – where slaves took their last bath before they were branded and taken to the castles.

There, they took the symbolic “First Bath of Return” in the Donkor Nsuo (Slave River) – which symbolises spiritual cleansing, forgiveness, and connection with the spirits of African ancestors who were victims of the transatlantic slave trade.

Dr Kanem will on Friday, April 22, 2022 convene a high-level forum in Accra to promote the rights of the People of African Descent.

The forum precedes this year’s International Day for People of African Descent which will be observed on 31st August, 2022.