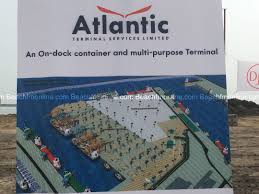 Construction of Ibistek’s Atlantic Terminal, about 500 jobs to be created.

About five hundred direct, and more than two hundred indirect jobs are expected to be created in the Western Regional Capital, Sekondi-Takoradi, following the commencement of construction works on the new multipurpose terminal in the Takoradi Port.

After months of suspense as to when the construction of the groundbreaking project; the Multipurpose Container Terminal (Atlantic Terminal) at the Takoradi Port, will begin, a brick laying ceremony has been held to signify the commencement of the first phase of the construction by Ibistek, and, already, some local people have been engaged on the project.

Jan Di Nul, the construction company working on the multipurpose container Terminal for Ibistek, has revealed that about five hundred jobs will be created for the people of the Sekondi-Takoradi Metropolis, and adjourning districts with the commencement of work.

Briefing the press on the development and prospects of employment creation for the people of the metropolis, at the sidelines of a bricklaying ceremony to signify the commencement of the construction works, Pascal Dumez, the Project Engineer for Jan De Null, explained that some three hundred and fifty (350) local people will be engaged as labour on the project.

Mr. Dumez explained that the first phase will involve the construction of a 600 meter quay wall with pavement alongside it, coupled with dredging beside it, from 14 meters to 16 meters.

“The first phase of the project is about laying blocks; blocks are required to make the key wall for the Atlantic Terminal Services (Ibistek). The quay wall will be 600 meters and will be for the multipurpose container terminal. So we started this day with casting of the blocks; each block is around 50 tons and we have to make around 4000 tons of the 50 tons blocks

He explained that to complete this project, “we are talking about 24 months to complete the key wall construction including the full facility behind it.”

Director of the Takoradi Port, Captain Ebenezer Afedzi said the completion of this project will enhance revenue generation of the Port, since all the necessary considerations have been duly undertaken.

“They are going to pay for whatever monies they’re investing here, and we are going to take our due share of whatever come s in here. We’ve done our checks and we think it will help us. Because I’ve told you that hitherto we were doing just about fifty thousand TUs a year, and we’re committing a lot to that.

“So if we are able to increase the throughput to let’s say two hundred thousand (200000) and we take even twenty-five percent (25%) of whatever that comes into the 200000, then it means we are just around fifty thousand (50,000) TUs revenue without doing anything, so it’s going to help us a lot,” Capt. Afedzi explained.