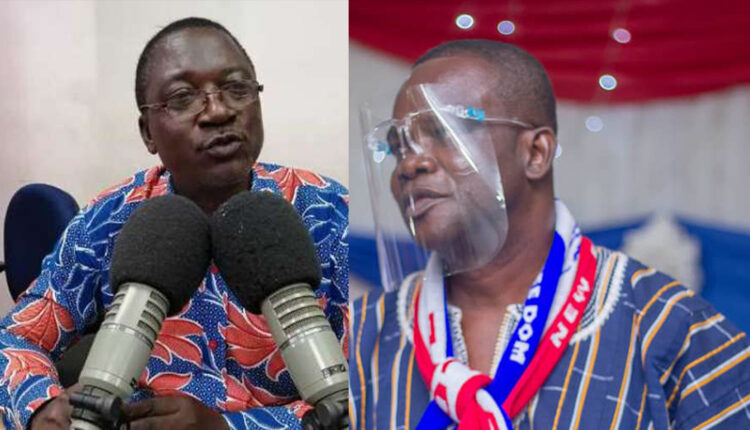 Commotion at Shama as MP and DCE lock horns

There is a seeming ‘fight’ between the Member of Parliament for Shama Lawyer Erickson Abakah and the District Chief Executive Mr. Joseph Amoah. The two had banter on Skyy Power FM’s Jolly breakfast show on Thursday, April 8, 2021. The member of parliament is accusing the DCE of campaigning skirt and blouse during the campaign for the 2020 general election.

He says there were several occasions where followers of the DCE were spotted campaigning for Nana Addo Dankwa Akufo Addo and the NDC candidate.

Lawyer Erickson Abakah says he cannot work with such a DCE and as such the President should not consider Mr. Joseph Amoah for another appointment.

He says the DCE cannot even gather the courage to present himself again for the position.

“He should not even have the moral courage to go for the position of DCE again. Joseph Amoah does not have the moral right to even present himself for the position. If Joseph Amoah has the conscience, he will not even think of becoming the DCE again. His name will not even cross the President’s mind. Because the President is aware of whatever happened during the campaign. I even sent a report to the president on what was happening here so he is already aware of everything. I have lost three times in the internal primaries. I have won just one and even at that he has been fighting me since. I cannot work with him and I’m sure he even does not have the dream of becoming a DCE again”.

On his part, the District Chief Executive for Shama Mr. Joseph Amoah described the allegations as false. According to him, he was with the MP throughout the campaign and not on a single occasion that he campaigned against NPP.

He advised the MP to focus on the development of the district instead of the disunity he is preaching. He is accusing the MP of disconnecting himself from the Assembly.

In fact, I’m worried about what I’m hearing today. I never wished my MP could say these words on radio. There is no single truth to what he is saying against me. If we all love the party we must work together for the good of all. He must ensure the party is peaceful. I followed him to several places during the campaign. I even donated cash and items to support the campaign. I have been a member of the NPP for a long time and there is no way I can campaign against the party”. He narrated.

The DCE pleaded with members of the party in the Shama Constituency to remain calm. He says the interest of the party must surpass every individual interest and as such the Member of Parliament should consider preaching unity and not division.

“I’m pleading with him (The Member of Parliament), he cannot damage the fortunes of the Party. All what I will say is that he should not be a vehicle through which the party will be divided. I think the executives of the party must question his conduct. The decision to appoint or not lies in the hands of the President. The MP should not be doing what he has started. We all must ensure unity and prosecute the party’s agenda”. Mr. Joseph Amoah added.