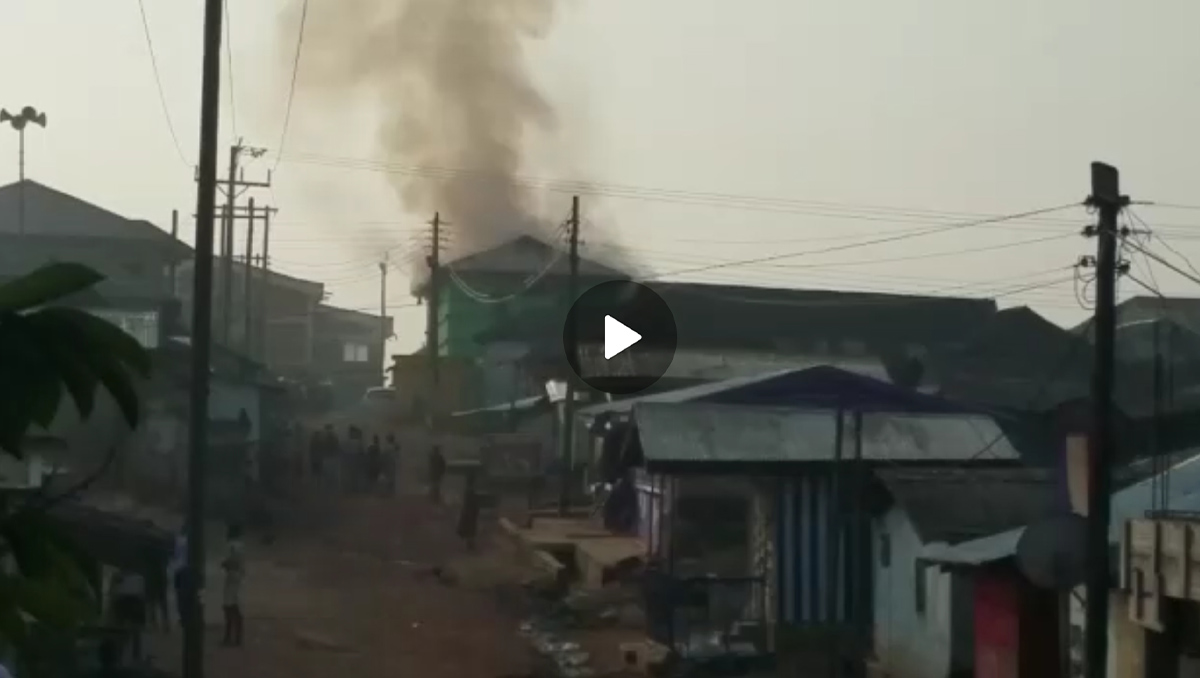 There is currently a seemingly commotion at Dompim Pepesa in the Tarkwa Nsuaem Municipality of the Western Region. The situation has led to the palace of the Chief, Ohyeawora Bianyowa Panyin being set ablaze.

According to reports, the armed police officers had gone to the palace to serve a writ of summons, demanding the eviction of the chief from the palace.

Upon arriving at the palace, the armed police officers accompanied by the court bailiffs, demanded to have a physical meeting with the Chiefs to enable them serve him the summons.

The chief however did not avail himself as scheduled and that led to the police forcing their way to the palace. Accounts given by the chief, Ohyeawora Bianyowa Panyin on Takoradi based Skyy Power FM has revealed that, the armed police officers after forcing their way through the palace molested him.

“I was inside with my family when I heard noise outside, armed police men together with macho men were all over my palace. They had interaction with someone in the palace and the next thing I saw was a teargas shot, and all of a sudden, smoke from the teargas was all over the room, the next moment, I saw the police breaking into the palace. They pushed me on the floor and one of the police officers stepped on my ribs with his boot, I became helpless with my wife and children, so the next decision was to run for my life. I jumped through the window with my family and that got us injured”. He noted

He further revealed that, the bailiff later served him the summons on the hospital bed. “I got injured and was rushed to the hospital. It was on the hospital bed that, the bailiff threw the summons on me. So, if you were coming to serve me a summons, why would you arm yourself with teargas. You could have given me the writ and the matter would have ended there, now all of belongings, everything I have are lost to fire, what kind of treatment is this”. He Sadly indicated.

In the meantime, the Public Relations Officer of the Western Region Police Command, DSP Olivia Ewurabena Adiku has told Skyy news in an interview that, “The Police was only there to enforce a court order, but he (the Chief) was feeling reluctant to come out, the police kept being outside, the next moment, the palace was on fire, but investigations are currently ongoing” She told Samuel Kojo Brace, host of the Jolly breakfast show on Skyy Power FM.

Information reaching our desks indicates, there is heavy police presence currently in the community and that has led to some of the community members fleeing.

There has been a long-term litigation between the installed Chief Ohyeawora Bianwowa Panyin and another faction, who according to the police have won the case as rightful owners of the stool.

Municipal Chief Executive of the Tarkwa Nsuaem Municipality, Mr. Ben Kesse on his part condemned the police for the attacks.

“They have started again, chasing people out, shooting and scaring people from the town. As I speak to you, there are residents in the area fleeing in buses, they are scared for their lives. The issue is getting serious, I’m calling on the regional police commander to call the police to order”. He noted.