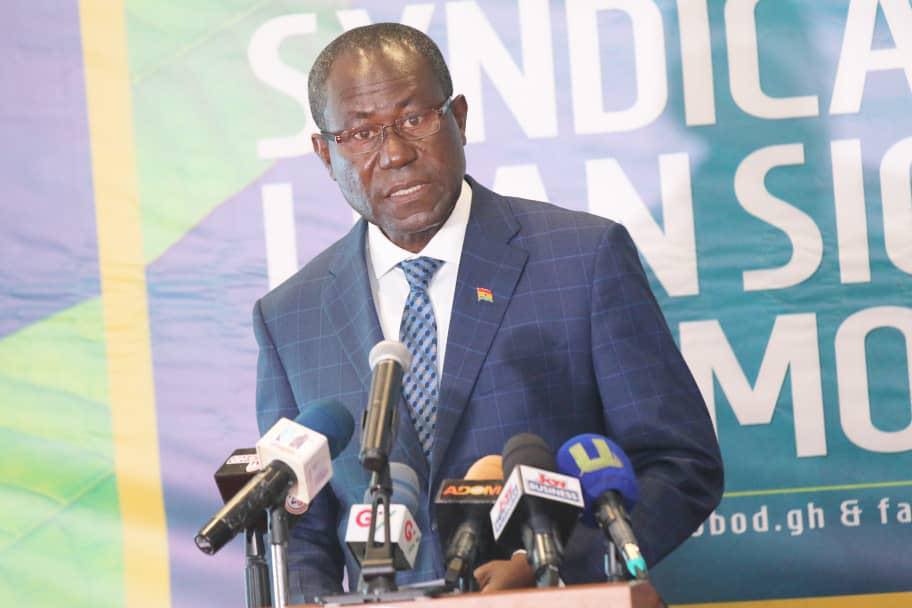 The Ghana Cocoa Board (COCOBOD) has signed an agreement for a US$1.3 billion syndicated loan facility for the 2020/2021 cocoa crop season. The facility, which is the largest soft commodity deal in sub-Saharan Africa, will be used to finance cocoa purchases and related operational activities in the crop season.

The signing ceremony which took place on Tuesday, 29th September at the Marriot Hotel in Accra, was attended in-person by officials from COCOBOD, the government and representatives of the local financial institutions who participated in this year’s syndication. Officials from the foreign banks, including the lead arrangers, attended the ceremony via video conferencing.
[the_ad id=”8286″]
Speaking at the ceremony, the Chief Executive of COCOBOD, Hon. Joseph Boahen Aidoo expressed his gratitude to the banks for their trust in Ghana’s cocoa industry for which reason they are willing to fund the operations of the industry.
“Let me take this opportunity to thank our reliable funding institutions for their continuous trust in the operations of Ghana’s cocoa industry which has culminated in their ever willingness to pull resources together for our annual syndications,” he said.
“We have also returned this trust by ensuring that we never defaulted in repaying the loans since the 1992/1993 crop season when the first one was signed. In fact, on several occasions, the loan was repaid ahead of schedule. The 2019/2020 syndicated loan, for instance, was repaid two months ahead of schedule,” he noted.
[the_ad id=”8286″]
He also said ‘Ayekoo’ to Ghanaian cocoa farmers who, he acknowledged as having worked tirelessly to maintain Ghana’s reputation as the leading producer of premium quality cocoa in the world and a reliable partner with which to do business.
Since the 1992/93 crop season, COCOBOD has consistently and successfully, through the pre-export syndicated finance facility, obtained a receivables-backed syndicated loan each year from the international money market to finance its cocoa purchases.
The latest loan facility, which has an interest rate plus libor of 1.75%, is repayable in seven (7) calendar months and projected to help purchase about 900,000 metric tonnes of cocoa.
Hon. Joseph Boahen Aidoo assured the financial institutions and all other stakeholders that “the loan will be used solely for the purpose for which it has been contracted.” He further guaranteed that, as have been done over the years, the loan will be repaid on schedule.
Yoriko Noguchi, MUFG Bank Limited’s Director for Commodity and Structured Trade Finance, who spoke on behalf of the financial institutions who organised the loan facility congratulated COCOBOD for successfully raising the funds in spite of the substantial negative impact which the COVID-19 pandemic has had on the global economy.
[the_ad id=”8286″]
“In spite of the challenges faced over the last six (6) months, COCOBOD has demonstrated true professionalism and pragmatism and this led to the success in raising the funds,” she asserted.
A total of 28 institutions, made up of 4 local and 24 international financial institutions participated in this year’s syndication. This was despite speculations and media reports in June that COCOBOD’s international financial partners were reluctant to raise the loan facility due to perceived risks associated with the COVID-19 pandemic.
Hon. Boahen Aidoo responded to the speculations and said they were “simply not accurate”. COCOBOD was at the time, he said, negotiating the terms of the proposals with its financial partners and had projected that the terms will be finalised, and the deal signed in September.
The Initial mandated lead arrangers for the US$1.3 billion syndicated loan facility include ABN AMRO Bank NIV, Bank Of China Limited London Branch, Cooperative Rabobank UA and DZ BANK AG Deutsche Zentral-Zenossenscha FTS Bank, Frankfurt AM Main.
The others are Ghana International Bank PLC, Industrial and Commercial Bank of China Limited – London Branch, MUFG Bank Limited, NATIXIS, Societe Generale and Standard Charted Bank.
The four local banks participating are Ecobank Ghana Limited, Societe General Ghana Limited, ABSA Ghana Limited and Stanbic Bank Ghana Limited.
COCOBODGhanaHeadlinesTop story
You might also like
Business