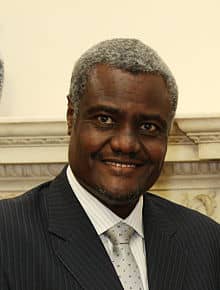 Chairperson of the African Union Commission, Mr Moussa Faki Mahamat, is expected in Ghana at the weekend as a special guest at the formal inauguration of Bisa Aberwa Museum at Notompo, Sekondi, in the Western Region on Sunday, July 28.

Sources close to the Board of Trustees of the the Pan African museum disclosed in Accra yesterday that Mr Mahamat, who was former Prime Minister of Chad and has been AU Commission chair since March 2017, may be accompanied by his Ghanaian Deputy Chairperson, Mr Thomas Kwesi Quartey.

The inaugural ceremony itself will be performed by the Frist Lady of Ghana, Mrs Rebecca Naa Okaikor Akufo Addo, an event to which Ministers of State, Members of Parliament, the Diplomatic Corps, traditional rulers, heads of state institutions and the private sector have been invited.

With about 2,200 artefacts, sculptural pieces and photographs of heroes of the African struggle and the African American Civil Rights Movement as well as other Black personalities in the French, Portuguese and Spanish Caribbean, the museum is created to be one of the largest sculptural representations in clay, wood, cement, paintings and photographs, of personalities whose sacrifices have shaped African history, both within the continent and the diaspora.

Speaking at a Media Preview at Nkotompo ahead of Sunday’s opening, Mr Kwaw Ansah, who chairs the museum’s 12-member Board of Trustees, , said “Africa has made contributions to world civilization and we ought to show to tell our story.”

About Africa’s history related to slavery and colonialism, Mr Ansah said “on display at Bisa Aberwa are artefacts that are a reminder of the struggle of the Black race, our culture and belief system.”

Meanwhile, the Ghana Tourism Authority (GTA) has extended an arm of co-operation to the international museum, seen by many as a major tourist attraction.

Justifying the GTA’s interest, Mr Akwasi Agyemang, Chief Executive Officer of the Authority, told newsmen after a tour of the facility at Nkotompo, that “Bisa Aberwa is a welcome addition to Ghana’s heritage resource.”

He described the museum as “ingenuous, creative and rich in its curation and depiction” and congratulated Mr Kwaw Ansah “for once again blessing the trail”.