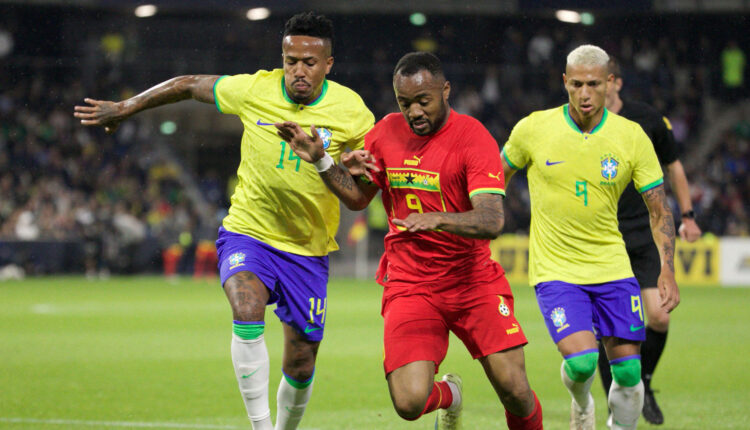 Brazil’s Samba lads put on a strong showing to defeat Ghana 3-0 in a pre-World Cup friendly match played in France.

Brazil won again thanks to a goal from Marquinhos and two goals from Richarlison in the opening period.

With intense assault pressure in the early going, the Samba guys made their intentions clear.

As a result, Ghana’s defense, which was centered on Baba Rahman, Daniel Amartey, and Denis Odoi, was outsmarted by Paris Saint-Germain defender Marquinhos, who scored the game’s first goal in the ninth minute. Richarlison then added two more goals.

Raphina and Neymar had excellent opportunities to score for Brazil, but neither player was able to do so.

Coach Otto Addo substituted Mohammed Salisu for Felix Afena-Gyan after the break, and Kamaldeen Sulemana was replaced by Inaki Williams. Despite the Black Stars’ improved performance, Ghana’s goal could not be achieved.

Elisha Owusu, Tariq Lamptey, and Antoine Semenyo were substituted in for Baba Idrissu, Denis Odoi, and Dede Ayew in the 72nd minute, however the Black Stars were unable to score at least a consolation goal for Ghana.

The friendly contest is a component of the planning for the World in Qatar in November-December.

In order to finalize preparations for the biggest football show in the world, Ghana would play Nicaragua on Tuesday in Spain.