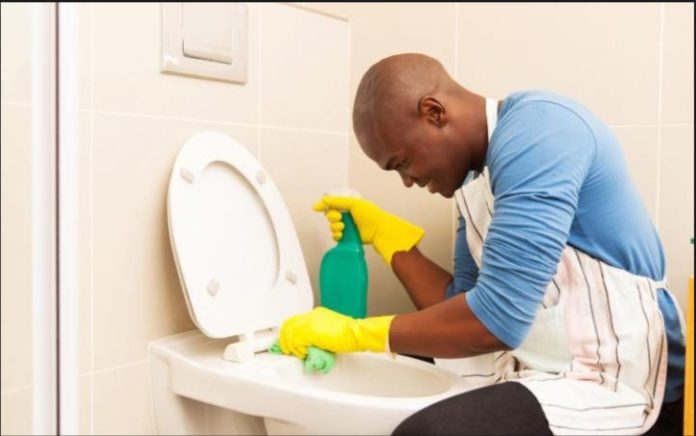 White men can be the worst at sharing household chores with women a new study shows.

While white British men do around six hours of housework per week, black Caribbean and black African men do more than seven.

The study, conducted by the Institute for Social and Economic research, found that on average men from all ethnic groups do around 30 per cent of the housework (around six hours a week) while women do the rest (an average of 14 hours a week.)

But black Caribbean men pick up around 40 per cent of the housework ( around 7.12 hours every week) while their female partners spend 13.5 hours on domestic chores.

In contrast, Pakistan men were the worst at sharing housework with women, undertaking just 4.85 hours a week – only 17 per cent of the housework.

Indian men spend almost seven hours a week cleaning and cooking, but as their partners do more than 20 hours a week, this accounts for only around a quarter of the overall load.

The researchers, who analysed almost 30,000 couples in the UK, found that white British men were also less than equal with housework doing just 31 per cent.

“[It] may reflect a strong history and culture of black Caribbean women being in paid employment making combining family life and paid work the norm for this group.”

“An interesting finding is that it is not necessarily white British couples who are always most egalitarian in their division of domestic labour or in their gender-role attitudes,” they concluded.

“In particular black Caribbean men have the least traditional gender-role attitudes of all groups.”

Researchers suggested this could be due to a “legacy of egalitarian family forms combined with the experience of racial inequality leads them to be more critical of gender inequality than other ethnic groups”.

But it could also be due to how normal it is for their female partners to be in paid employment: “[It] may reflect a strong history and culture of black Caribbean women being in paid employment making combining family life and paid work the norm for this group.”

“White British couples are not necessarily the most modern and egalitarian in their outlook on housework.”
Heather Laurie

The researchers found that on average women with degrees and those in paid employment did a significantly lower share of housework.

Pakistani men were found to have the most ‘traditional’ views while black Caribbean men had the most egalitarian attitudes.

Professor Heather Laurie, who co-conducted the study, told the Guardian: “We found both differences and similarities among ethnic groups, but were surprised to see that in multicultural Britain today, white British couples are not necessarily the most modern and egalitarian in their outlook on housework.”

BACK ACNE: EVERYTHING YOU NEED TO KNOW

4 ways to keep her happy

8 Easy Things to Do on a Sunday Night That Will...

Even a single fall could be fatal for the elderly