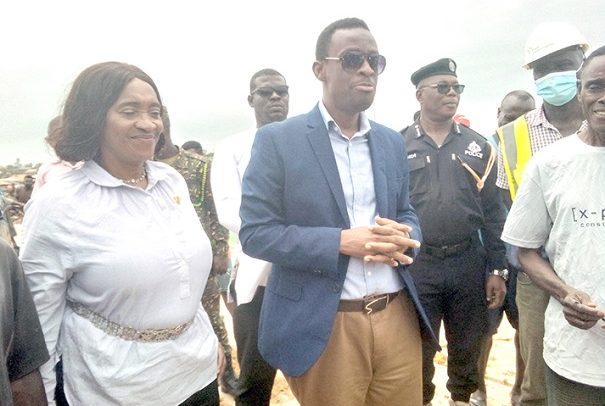 The construction of a mini-harbour and fish landing site at Axim in the Nzema East Municipality of the Western Region is about 85 per cent complete.

The project is in fulfilment of a pledge the current president made to the people of the ancient fishing town and it is being constructed by China Habour Engineering.

The Western Regional Minister Kwabena Okyere Darko-Mensah, who inspected the progress of work on the project as part of his three days working visits to the Nzema area, said so far the key component of the productive part which is the quay wall, has been completed.

He mentioned other facilities at the mini harbour as an administration building, fish market, net mending hall, ice making plant,, fuel depot, daycare, toilet facility, and a power station among others.

He assured me that the little work that is left to be done on the project would be completed by November or December this year.

“As you can see, the artisanal fishermen have already started using the facility. I have asked the contractor to pave the compound to tidy up the whole project”, he stressed.

He pointed out that he has also asked the Economic Planning team of the Nzema East Municipal Assembly to relook at industrializing the fishing business in the area to have positive impact on the people.

The Minister and his entourage later inspected ongoing works at the site of the Axim Sea Defence wall which is also about 80 per cent complete.

He said government is organizing itself financially, to reinvest in similar projects at Amaful Kuma in the region and Keta in the Volta region.

The Minister said the late Paa Grant, one of the founding fathers of the country hailed from Axim, adding “The first Bank of British West Africa was in Axim, hence the need to develop the area to befit its status”.

Earlier, Awulae Attibrukusu III, the Paramount Chief of the Lower Axim Traditional Area said he was happy that the Municipality has had it fair share of the national cake under the current government.

He mentioned that the Axim sea defence wall project and the mini-Habour will help save the lives of his people and boost the local economy of the area respectively.

He, however, made a passionate appeal to the government to expedite work on the sea defence wall project which he said was at a standstill.