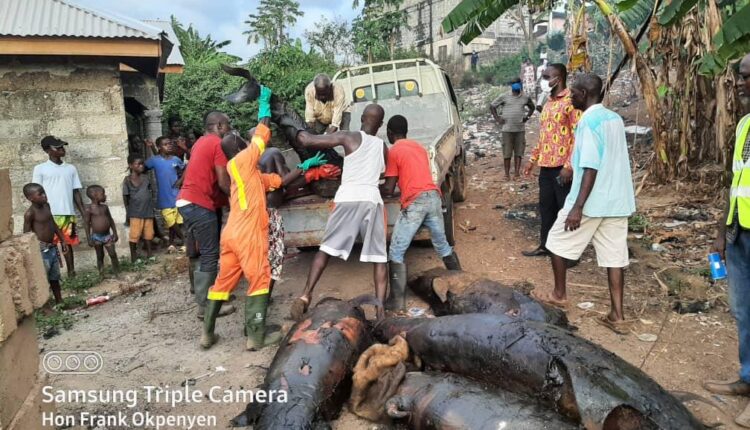 It has been reported by the MCE in the Nzema East Municipality, Frank Okpenyen that there are about 138 dolphins still in possession of the Axim locals.

Speaking on Skyy Power FM’s afternoon news, the MCE made it known about 200 of the mammals were washed ashore and about 30 were released back to the sea because they were still alive, the dead ones got buried which was about 32 and the locals took the rest away.

He indicated that, he has embarked on an operation with the BNI, Police Service, Environmental Health department and the FDA to retrieve the dolphins from the locals and also educate the whole municipality on the health risk they face when they consume the mammals. So far, he has retrieved about 7 full dolphins from the locals with his team and also took some of which has already been processed and ready to be sold to the general market.

The MCE expressed it is not bad to consume the dolphins but the cause of the death of the mammals is not yet established since the results of the test is still being processed. So the best thing to do now is to confiscate all the dolphins in possession of the locals since it may be harmful for consumption.

He also made it known he is appealing to the public to be very careful when consuming any fish and should stick to eating what they are familiar with. Any one with information about individuals hoarding any of the suspected mammals should report.