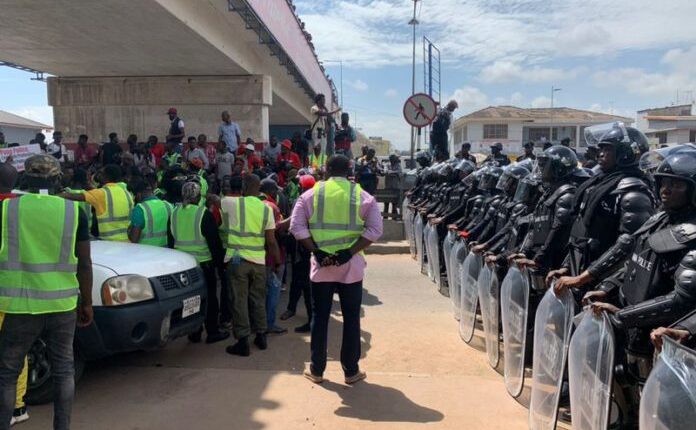 The Ghana Police have arrested 29 persons for participating in the ongoing chaotic #ariseGhanademo in Accra, on Tuesday, June 28.

According to reports from the police, 12 police officers have been injured and some service vehicles from the Ghana Police have been vandalised as well.

A separate statement from the Ghana Police Service states that the organisers of the demonstration will be arrested “for the attacks and damage to public property, in line with the provisions of Section 3 of the Public Order Act.”

The Chief Superintendent of Police, Grace Ansah-Akrofi, who is the Director of Public Affairs, in a statement indicated that the 12 police officers who were injured were treated in the Police Mobile Hospitals.

Also, contrary to the approved routes ordered by the court, the organisers insisted on using leading to the Jubilee House where the president is stationed.

After attempts by the police to persuade them to use approved routes did not yield any results, “Without any provocation, the demonstrators began pelting the police with stones,” the statement said.

Tyres were burnt on the road around the Kwame Nkrumah Circle giving the police no option but to use teargas and water cannons to subdue the rioting and restore order.

The Police ended by saying, “We would like to assure the public that we remain committed and professionally measured in the discharge of our constitutional mandate of enforcing law and order in the country.”