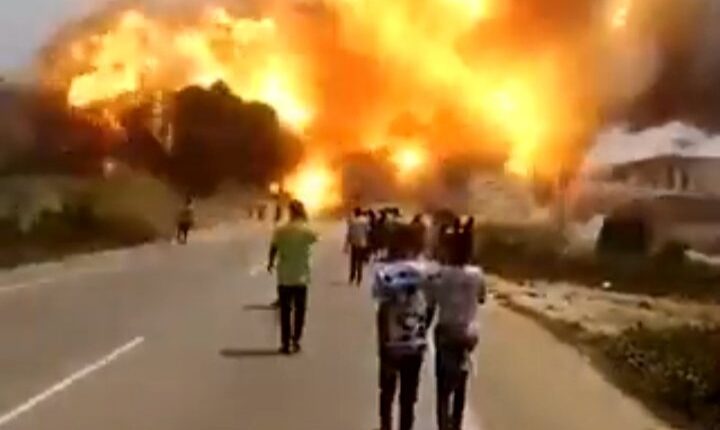 There has been a huge explosion in Appiatse between Bogoso and Bawdie in the Western Region on Thursday, January 20, and according to reports, an unidentified number of people have lost their lives in the process whiles others were injured.

There have been reports that the driver of the mining explosive vehicle moving from Tarkwa to Chirano mines warned the locals in Appiatse not to get close to the vehicle during the period of the accident.

However, an eyewitness by the name of Kwesi Agyemang is disputing claims being made that the driver did inform them about the car containing explosives.

According to him, they saw a truck on fire which was engulfed with thick smoke so they went there with the intention to help victims if any was available.

He says they stood there for close to 30 minutes checking for victims and if the driver had informed them about explosives, they would have moved away and there would not be many casualties.

He said, “Normally when there is an accident on our road, we move to check for casualties just to help. But when this one happened and we moved to the scene, the vehicle was ablaze and the driver had already left the scene.”

“We did not know what was in the vehicle and nobody gave us any information concerning that, disregard any rumours indicating that the driver informed us.”

“The first responders and people who got closer to the vehicle died, imagine if the driver told them about what was in the vehicle, do you think they would still be standing there to lose their lives.”