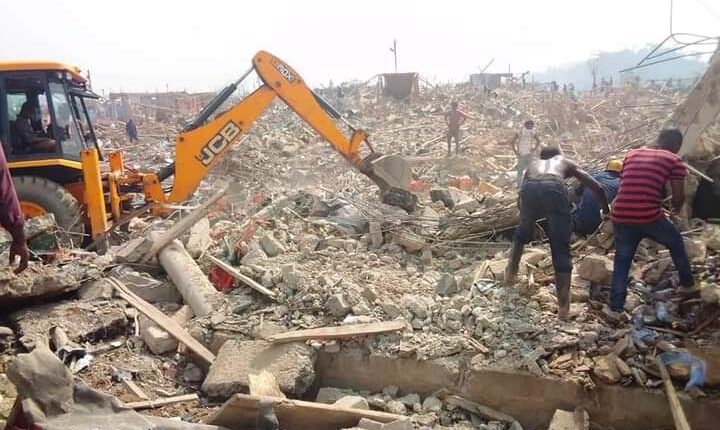 Members of the Dominion Miracle Centre of Faith at Appiatse in the Western Region Sunday morning combed through the debris of the church building torn down by the explosion to salvage remaining items.

Situated about 200 meters away from the spot of the blast, the Church was completely razed by the explosion, which occurred on Thursday, January 20, 2022.

It is the house of worship for some residents of Appiatse and adjoining communities every Sunday.

Yesterday, Sunday, January 23, 2022, was supposed to be a “special day” for the Church as two of its “dedicated members” had scheduled to tie the knot in the Church – but that had to be cancelled in the wake of the disaster, The Reverend Derrick Eshun, senior pastor of the Church, told the Ghana News Agency.

“The wedding has been called off until later when we see what we can do. It is very unfortunate but life will continue and we pray that everything will be fine afterwards,” he said.

Supported by two of his church members, they handpicked charred remains of keyboards, drums, amplifier, speakers, mixer, and other items that appeared to have completely lost their usefulness as consolation for the “huge loss.”

Rev. Eshun said it would cost the church not less than GH₵ 15,000 to replace the items destroyed.

Narrating how he received the news, he said: “I was in the house when one church member called me that the whole Appiatse is burning… I went to the hospital and found that many people were there and some were in critical condition so I had to help them before I rushed here to see what has happened.”

Rev. Eshun urged members of the Church to remain calm, adding, “We are believing God that we will come back to our normal lives.”

Fourteen people were killed and 179 others injured in last Thursday’s explosion.
The Minerals Commission on Saturday shut down Maxam Ghana Limited, owners of the truck that exploded, to pave way for investigations into the accident.

Vice President Mahamudu Bawumia who led a Government delegation to the community on Friday, said Government would collaborate with the State Housing Corporation and mining companies to construct temporary housing facilities for those displaced in the explosion.

The Prestea Huni-Valley Municipal Assembly said it would on Monday inaugurate a 11-member committee to manage donations for the Appiatse explosion victims.