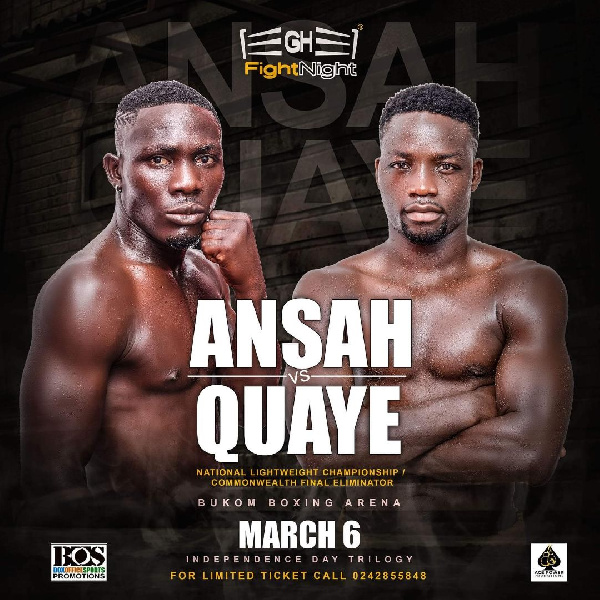 Ansah\Quaye ready for the “Trilogy” in Independence Day thriller

Two of Ghana’s fiercest rivals in boxing Michael “One Bullet” Ansah and Sherrif “One Time” Quaye are battle-ready for what has been dubbed the “trilogy” on Saturday, March 6, as part of the Independence Day Celebration at the Bukom Boxing Arena, Accra.

The fight is set to rekindle the rivalry between the two top boxers in the Lightweight division and would also settle a long feud between the two boxers over who is the best in the division.

It would be the third time the two boxers would be fighting within three years.

In October 2018, Quaye recorded a split decision over Ansah to annex the Lightweight title, but the fans of the latter believed their boxer deserved to win and called for a re-match.

A year later, under the auspices of Box Office Boxing Promotion, it was full of fireworks as Ansah recorded seventh-round Technical Knockout (TKO) win over Quaye.

Ansah was dominant on the night and subjected Quaye to a severe beating in the latter part of round six.

However, the debate over who is the best after a victory each remains on the table hence the trilogy.

Ansah, 31, would come in with 18 fights, ten knock-outs, and two defeats, with Quaye 22, making an appearance with 19 fights with just a defeat and 12 knockouts, signaling a clear contest of two boxers with equal strengths.

It is expected to be full of fireworks, a fierce battle between the two “fine” boxers on the night with pundits finding it difficult to make a prediction.

Also on the night are the darling boy of Bukom and undefeated featherweight boxer Alfred “Bukom Bomber” Lamptey would slug it out with veteran George Krampah for the West Africa Boxing Union (WABU) title, with a National Featherweight Championship clash involving undefeated champion John Laryea and Kamarudeen Boyefio.

Holy Dorgbetor, the new kid on the block would face Edward Kambassa in a featherweight contest while Daniel Aduku would take on Naimou Aziz Samson in a Super Welterweight contest.

Stylish amazing national champion, Theophilus Tetteh would engage Musa Appiah at Super Bantamweight, while Daniel Gorsh and debutant Michael Abban are billed to fight yet to be announced opponents.

Addressing the media on the promotion, Mr. Alex Ntiamoah – Boakye Chief Executive Officer of Box Office Boxing promotion said all Covid – 19 Protocols would be observed and all the boxers and officials would be tested.

He hinted that it will be shown exclusively on Ace Power TV with seats for only 300 guests.