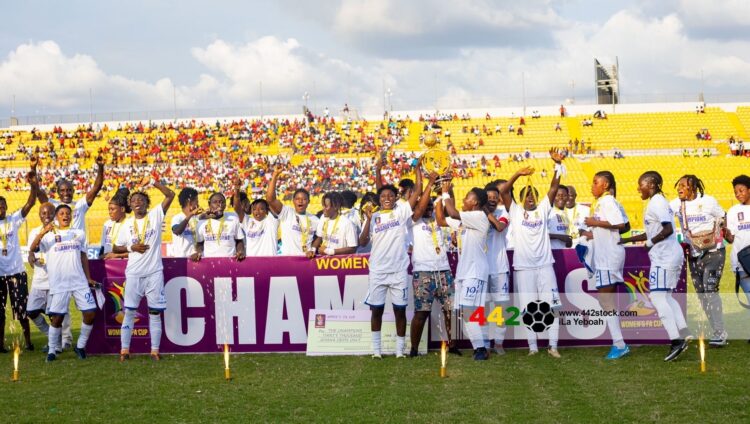 Ampem Darkoa Ladies have beaten old foes Hasaacas Ladies by a lone goal at the Baba Yara Sports Stadium to be crowned champions of the 2021/2022 Women’s FA Cup.

The side, after beating Hasaacas Ladies in the finals of the Women’s Premier League was up to the task of handing Coach Yussif Basigi his second defeat this season.

An early goal from Comfort Yeboah was all Ampem Darkoa needed to hand Hasaacas Ladies the painful defeat.

The first few minutes of the game saw the two sides force the ball into each other’s half with Hasaacas Ladies looking very dangerous in the front with Doris Boaduwaa who was haunting for her first goal.

Ampem Darkoa Ladies also kept the ball into their pocket as they shared some beautiful passes to open up the defence of Hasaacas Ladies.

The Hasmal lads were still in search of an opener as they failed to utilize their chances as the defence of Ampem Darkoa thwarted the efforts of Hasaacas Ladies.

It was Yeboah who gave the Nanamma the lead after converting a beautiful penalty at the right top corner of the net in the 17th minute of the game.

Joe Nana Adarkwah’s tactics change was solid as he cemented his defence to prevent Hasaacas from grabbing an equalizer until the first half ended.

The beautiful counterplay from Coach Basigi’s side was very solid as they also kept on sending crosses into the opponent’s half in search of an equalizer.

It was a frustrating moment for the 2021 winners but they still kept their heads up in the game.

Ampem Darkoa Ladies’ goalkeeper, Safiatu Salifu was a pillar of rock in her pole as she stopped her opponent’s long-range shots with some incredible saves.

Skipper Justice Tweneboa and Anaesthesia Achiaa also had their day as they made some dying clearances to keep the techiman-based club in the game.

Coach Basigi after several substitutions still couldn’t grab an equalizer as a centre referee, Audrey Atangpugbire blew her final whistle to end the game after an additional minute of 5.

Ampem Darkoa Ladies have now won a double this season after beating Hasaacas Ladies to be crowned champions of the Ghana Women’s Premier League and the Women’s FA Cup.

Having qualified to represent Ghana in Africa, Ampem Darkoa has begun preparations to hoist high the flag of the country.