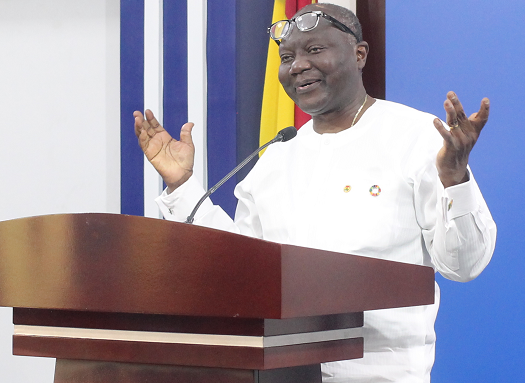 The Minister of Finance, Ken Ofori-Atta, has called for support for the Agyapa Deal to progress instead of it being abandoned.

Responding to a question about the deal at a press briefing in Accra yesterday, the minister described the deal as a “good one” that would help the country to raise resources and reduce its debt exposure.

Justifying the deal, he said: “It is not something that the country needs to drop, that is an asset”.

The question, Mr Ofori-Atta stated, should not be about whether monetising mineral royalties or listing the company was good or bad.

“Rather, if you have a problem with the process, let’s articulate that and cure it. Let’s not drop something that will be good for us and help reduce our debt exposure.”

The discussion, Mr Ofori-Atta said, should be about the processes involved in negotiating a better deal for the country under the Agyapa proposal.

The minister said it was his firm belief that capital markets were fertile sources of equity resources but the country was not leveraging it.

The Minerals Income Investment Fund (MIIF) recently stated that it was developing a new strategy to list Agyapa on the Ghana and London Stock Exchanges by the end of the year.

Mr Ofori-Atta hinted that the deal would be going back to the Office of the Attorney-General and Parliament for consideration.

“We will never have done the Free Senior High School if we listened to other people,” he said, adding that 400,000 people now had a chance to do something with their lives because the government was firm with its decision on the policy.

The government passed the Minerals Income Investment Fund Act, 2018 (Act 978) with the key objective of maximising the county’s mineral wealth for the benefit of Ghanaians while ensuring
that receiving royalties from gold mining companies is sustainable.

The law was amended to enable the fund to incorporate subsidiaries and use it as a special purpose vehicle (SPV) to do business across the world.

MIIF incorporated Agyapa Royalties Investment Ltd as SPV and holding company to be responsible for managing 75.6 per cent of Ghana’s royalty inflow from the 12 gold mining companies that currently operate in the country.

The SPV, incorporated as a private institution, independent of governmental control, will receive the royalties due to the state to capitalising on the company.

Agyapa will then float up to 49 per cent on the LSE to be in the business of financing mining infrastructure and assets in Ghana and across the world.

Agyapa, which was initially incorporated as Asaase Royalties, in turn, owns ARG Royalties Ltd, which would be responsible for channelling the royalties to its parent company.

Attempts to quote both companies on the Ghana Stock Exchange (GSE) and the London Stock Exchange (LSE) through an initial public offerings (IPOs) were met with a public outcry, leading to its suspension last year.

But many analysts and political figures have criticised the transaction and alleged that it is meant to allow a few individuals to have control over the country’s mineral royalties for personal gain.

The government has been explaining that apart from the physical benefits such as the proceeds from the transaction, the country will have a very transparent entity and vehicle which could be used to raise future investments for financing mining assets across Africa.

Local small-scale mining companies, the proponents of Agyapa business model believe, can resort to Agyapa for equity financing to bolster the local mining industry to ensure that Ghanaians are also involved in mining activities.

When asked whether the government was considering measures to control prices, the Finance Minister said the government would not consider price control as a measure to deal with inflation in spite of the surge in the general prices of goods and services with its attendant high cost of living.

History, Mr Ofori-Atta recounted, had exposed the challenges such measures could have on the economy, stating that could lead to favouritism and controlling people’s lives.

The government, he added, would rather consider assisting Ghanaians with the resources to work as entrepreneurs which would increase productivity in the economy.

The event will be held at the Accra International Conference Centre from Monday, May 23 to Friday, May 27, this year on the theme: “Achieving Climate Resilience and a Just Energy Transition for Africa”.

The 2022 AGM is significant as it is the first physical meeting since 2019 and the first time Ghana, a founder member state, would be hosting the meetings.

The agreement to establish the AfDB was signed on August 14, 1963 in Khartoum, Sudan by about 31 African states being its members to the present 54 African member states and 27 non-African members.

About 1,000 delegates are expected to attend the meetings in which President Nana Addo Dankwa Akufo Addo is expected to address both the opening and closing ceremonies.

Ministers of Finance, Governors of central banks, leaders of local and international finance and development organisations, captains of industry, and civil society organisations from the 81-member states of the AfDB are expected to attend.

Mr Ofori-Atta outlined some activities at the meetings including a Presidential Dialogue on “Africa: Development Challenges and Opportunities”, and four statutory sittings of the Board of Governors, which would be held in closed sessions.

Other activities, the minister said, were the launch of the African Economic Outlook Report, 2022; the Africa Day Event, coinciding with the 50th anniversary of the passing of Dr Kwame Nkrumah; a seminar on Special Drawing Rights (SDRs); and a visit by the spouses of the participating governors to the Osu Children’s Home.

On the sidelines of these meetings, 30 indigenous industrialists and five financial technology companies (FINTECHs) would have the opportunity to showcase their services and products, Mr Ofori-Atta stated.

He added that the meetings would address pertinent economic issues affecting the continent, especially with the concurrent crisis in rising food prices and energy prices as well as a look at tightening financial conditions in Africa as 41 economies were severely exposed to at least one of the three major challenges.

The meeting would, therefore, provide some measures to deal with the pressing issues, the Finance Minister stated.

Mr Ofori-Atta thanked the AfDB for its support in establishing the Development Bank Ghana (DBG) and for providing $70 million to the government to support the COVID-19 safety measures and also to protect lives and preserve livelihoods.