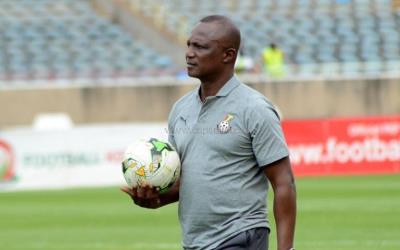 Black Stars coach Kwesi Appiah has named Samuel Owusu in his starting line up for this afternoon’s 2021 Africa Cup of Nations qualifier away in Sào Tomé.

The Saudi-based winger, replaces Alfred Duncan in what is the only change in Kwesi Appiah’s starting line up from the team which defeated South Africa 2:0 on Thursday.

The rest of the team remains the same as Richard Ofori, Andy Yiadom, Kassim Nuhu Joseph Aidoo and Gideon Mensah retain their respective positions in defense.

As it was on Thursday, Baba Iddrissu and Thomas Partey will screen Ghana’s defense, with support from Emmanuel Boateng, Andrew Ayew and Samuel Owusu who will also look to feed Jordan Ayew upfront.

The Black Stars will look  to maintain their one hundred percent start to the qualifiers this afternoon against a Sào Tome side seeking redemption at home after suffering a 0:4 defeat at home to Sudan on match day one.

Kwesi Appaih’s men will go top of the group with maximum points with a win against Sao Tome this afternoon despite South Africa’s earlier 1:0 victory over Sudan on Sunday.

The match kicks off at 13:00 GMT at the Sao Tome National Stadium, a facility that takes less than 1000 spectators.