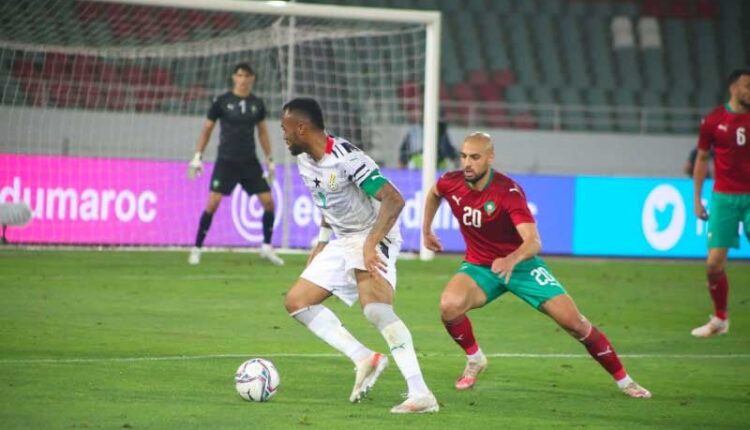 Morocco’s Sofiane Boufal goal in the 83rd minute against the Black Stars of Ghana ensured his side gathered the maximum points in the Africa Cup of Nations (AFCON) Group C encounter played on Monday evening at the Stade Ahmadou Ahidjo in Yaoundé, Cameroon.

It was all pain and disappointment on the faces of Ghanaians in Cameroon who gathered to watch and support the Black Stars to victory.

Ghana was cruising to a goalless draw to at least console themselves with a point until Boufal, who plays for S.CO. Anger in France punished the Stars following a defensive blunder.

In the first half, no decent chances were created from both sides, except with Thomas Partey who effected a free-kick that nearly beat Yassine Bounou in the 32nd minute.

With both sides chasing for a goal, Morocco was handed a free-kick outside the penalty box it was dealt with Joseph Wollacot with five minutes remaining to end the first.

Seven minutes from the break, the Atlas Lions mounted pressure on Black Stars which nearly gave them the lead.

Joseph Paintsil took the Moroccans on a counter-attack but he had no support to break the deadlock.

He again had a decent opportunity to hand Ghana a goal but his shot went wide.

The win puts Morocco on top of Group C with three points.

Ghana would play Gabon on Friday, January 14 before wrapping up with Comoros four days later in the group stage.