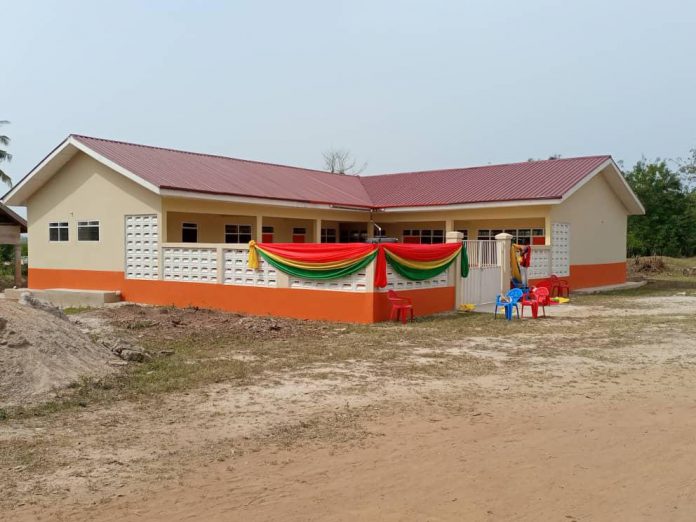 The facility is to enhance teaching and learning in the community.

The project, founded by the GETFUND at the cost of Gh300, 000 comes with an office, store and washrooms, furniture, storage tank, kitchen and servery for the schools feeding programme, among others.

According to him, in the last four years, more than 40 classroom blocks have been constructed in the Akontombra district with sponsorship from the District Assembly Common Fund(DACF), GETFUND and the One million dollars per constituency initiative.

“Teachers and pupils are not motivated to teach and learn in dilapidated structures so the government and the assembly will continue to ensure better educational infrastructures are provided”.

The MP announced that the new KG block was the sixth GETFUND funded kindergarten block to be constructed in the Akontombra District in the last four years and commended GETFUND for the projects.

The Former Deputy North Regional Minister, lauded the traditional authorities in the District for giving out the land for government projects in the area.

He asked the school management committee to take very good care of the facility and all government buildings so that the District Assembly would not have to use additional funds to maintain them.

Mr Amoah, on his part, commended the government and GETFUND for giving the Akontombra District its share of the national cake.

He said the Assembly would continue to engage the various communities on their priority needs and provide them accordingly.

Nana Krobea Asante, Chief of Ackaakrom, expressed gratitude to the MP and DCE for the number of projects in the District of which Ackaakrom was not left out.

“We were completely cut off from the District due to a collapsed bridge but thanks to the MP, we have been connected and can move to other communities”

Nana Asante also thanked the MP and DCE for providing the area with potable drinking water.

Mr Nicholas Anim Amoako, Ackaakrom School Improvement Support Officer(SISO), who represented the Akontombra District Director of Education, lauded the Government for the construction of the kindergarten block, which he noted would help increase enrollment in the school.

He said the kindergarten currently has a population of 170 pupils.

Mr Amoako promised to ensure teachers in the school maintained the school block to enable it last longer.

Mr Abban Emmanuel, a representative of Thedel Real Property Services Limited, a consultant for the project, expressed satisfaction with the work and urged contractors to always do an excellent work.

Principal calls for completion of projects