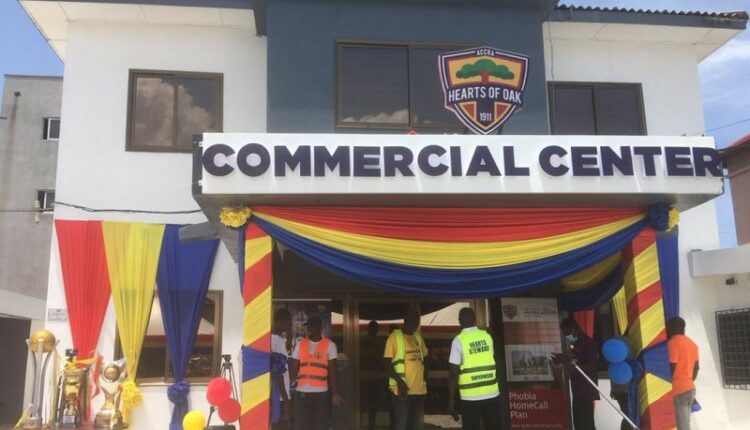 One of Ghana’s glamourous clubs, Accra Hearts of Oak has unveiled a modern Commercial Center to manage the revenue affairs of the club.

The project, which was one of the quadruple projects of the club, was set up to develop the management and technical strength of the club.

Speaking at the unveiling ceremony, the Board Chairman of the Club, Togbe Afede XIV, said the project was part of the club’s journey towards attaining prominence in African football.

According to him, the development of infrastructure in the club was a strategy, which would help aid the achievement of their goals.

“We identified the need to build up infrastructure as a very important strategy that would aid the achievement of all that we have been dreaming of, noting that infrastructure was the basic criteria for participation in the fourth coming Africa Super League.”

He said the management of the club was working on three more infrastructure projects, that was the building of a new Accra Hearts of Oak Head Office, 20-acre ultra-modern sports facility at Pobiman and the building of a 50,000 capacity stadium.

“We are determined to have this building almost done by the end of the year, to become part of the celebration of our 111th anniversary in November 11 this year,” he added

He urged supporters of the club that the Board was going to make Accra Hearts of Oak a club that everyone would be proud of.

Mr. Prosper Harrison Addo, the General Secretary of the GFA expressed excitement, saying, the initiative would contribute to the development of football in Ghana.

He urged various football clubs in Ghana to emulate the initiative to help in the development of Ghana Football.

Dr.  Nyaho Nyaho Tamakloe, also a Board Member of the club urged the club members to foster unity among themselves to help the club develop.