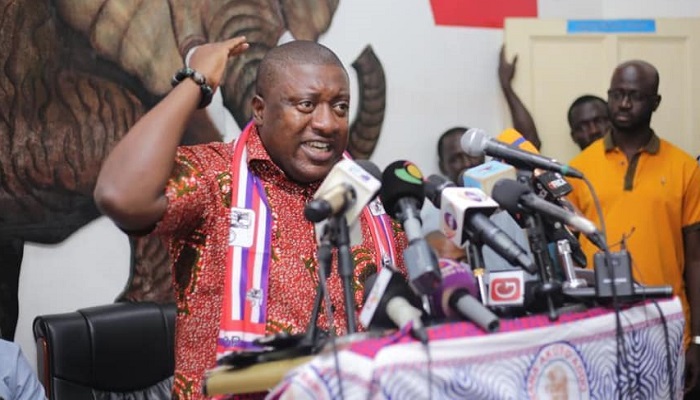 The National Youth Organiser for the New Patriotic Party, Henry Nana Boakye has chided former President John Dramani Mahama over claims that his government would restore and advance development for the people of this country. As though he wanted to remind John Mahama of his rather ‘insensitive’ and historic governance, Nana Bee as he’s affectionately called, said the former president and the National Democratic Congress (NDC) is nothing but a “contradiction” to what they offering Ghanaians in their People’s Manifesto for 2020 elections.

In his address at a conference held today, the National Youth Organiser charged Ghanaians not to trust the flagbearer and the NDC, as their record of causing undue hardships for the people remains terrifying.

Their manifesto, he said is a “contradiction of the very nature, form, and substance of the NDC both in government and in opposition”

“They’ve never governed with the interest of the people in heart neither have they created any policy to crafted jobs for prosperity. This is evident in the many anti-people centered policies they implemented when in government and in their fierce resistance for pro-poor policies of the NPP.

“Mr. Mahama and the NDC are notoriously known for putting their selfish interest ahead of the very needs of the people, including jobs. It is important to remind ourselves that the so-called people-centered party led by Mr. Mahama superintended over the most insensitive government that visited untold hardships and excruciating pain on the people of Ghana,” Nana Bee contended.

Mahama is ‘most inconsistent’ presidential candidate ever- Mac Manu