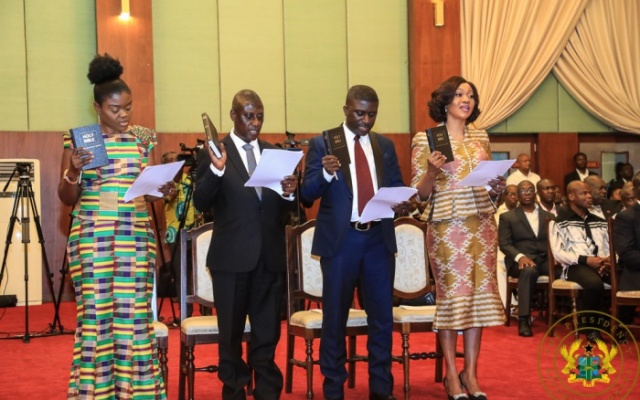 The General Secretary of the opposition National Democratic Congress (NDC), Johnson Asiedu Nketsiah has hinted that the removal of the commissioners at the Electoral Commission, is very likely, given the precedence President Nana Addo has set.

According to him, the basis for the removal of the former Chairperson of the EC, Charlotte Osei, was unjustifiable, and thus threatens the credibility and independence of the institution.

He prayed that the NDC would evaluate Jean Mensah and the other commissioners’ performance against ethics and standards of institutional governance before any conclusion about their tenure will be made.

Responding to a question from Umaru Sanda of CITI TV on what he [Asiedu Nketsia] thinks is prudent for maintaining Jean Mensah, the General Secretary said; “I doubt it very much”

He explained that the entire commission has been ‘bastardized’ by the government with so much political interference hence denting the credibility and independence of the election management body.

“…because when you have a stable institution and you decide to politicize it, then you create a serious problem for the institution itself and the nation that it is serving.

“Once you set a precedence of changing people anytime you find a problem with the institution, you will never know where it will stop. It’s a serious disservice the NPP has done to the nation by seeking to change the composition of the Electoral Commission,” he noted.

Johnson Asiedu Nketsiah reckoned that the late Prof Mills was rather thoughtful of the implications of the removal of heads of independent institutions when there is a change of government, and as such ‘in his circumstance maintained the Chief Justice’

“It’s rather appropriate to allow the institution to learn from its shortcomings, just as Prof Mills did with the Chief Justice at his time” he added.

“Prof. Mills was faced with such a challenge when there were hue and cry about the continued stay of the former Chief Justice but he resisted that temptation and then tried to do whatever was possible to help the judiciary grow. Unfortunately, Nana Addo failed that test. And decided to go and changing the composition of the Electoral Commission, and once the precedent has been set and the nation has accepted it, it would be difficult to restrain any other person who decides on something else to change the composition of other independent institution. That would amount to a disservice to our democracy.”

We don’t need the EC, we will collate our own results- Gen. Mosquito

Ghana’s economy in a recess, Nana Addo can’t blame it on...

Police arrest NPP delegate for taking a photo of his ballot