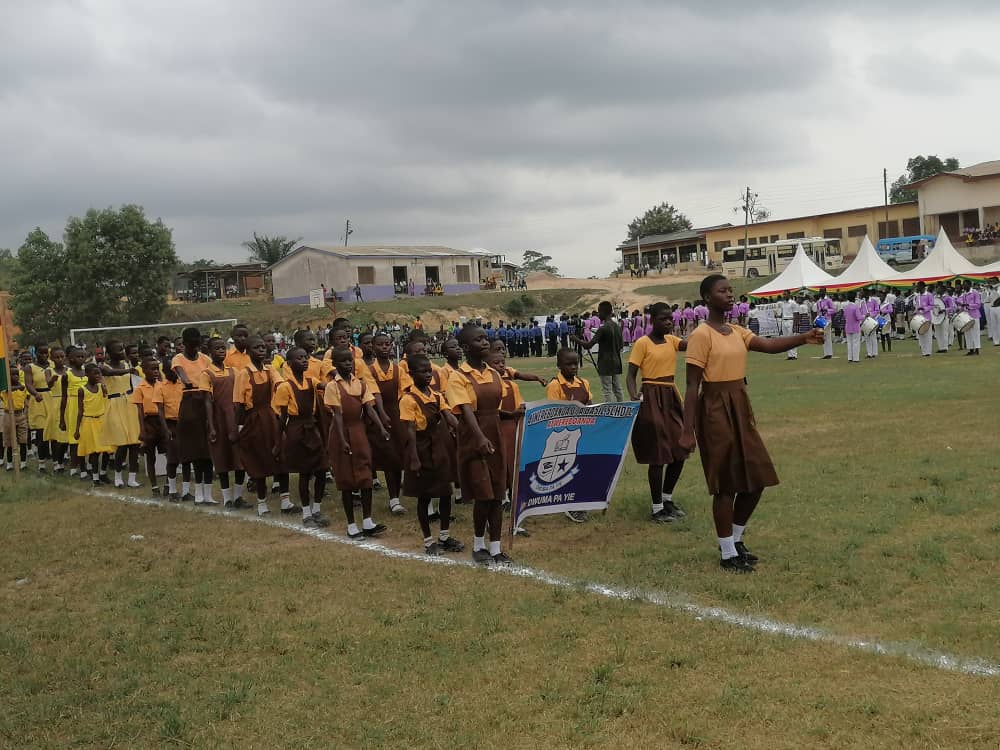 A cross-section of younger generations at various basic levels of education marched pass the Ghana Flag, as it waved through the warmth of the charged atmosphere.

District Chief Executive for the area, Joseph Amoah read a speech on behalf of the President of the Republic, H.E Nana Addo Dankwa Akufo Addo at the congregation.

With emphasis on the theme for the anniversary, “Consolidating our gains”, the president noted that it is worth reminiscing how far we’ve come since independence, in realising the aspirations of the Ghanaian people.

“At sixty-three (63), we know that we have squandered many opportunities that, properly utilised, would have brought us to the economic breakthrough to which we aspire. We lament, and rightly so, the infrastructure deficits that plague all sectors of our lives, and the considerable number of our people who still live in poverty. But, if truth be told, we have solid reason to rejoice and be thankful to the Almighty, for this is a blessed nation.

“It is a good thing that we are usually so very hard on ourselves, and the critical voices, sometimes, drown out everything else. For as long as we have not achieved our economic goals, we cannot, and we should not, relax and be complacent. However, we should learn to count our many blessings, and not talk ourselves down unnecessarily” he read.

The President entreated Ghanaians to be steadfast, and appreciate the gains made in our democratic governance adding;.”We should never forget that development through the democratic process, the path we have chosen in this Fourth Republic, is not exactly the easiest governance option. Many of the countries that have made miraculous economic transformations did so, more often than not, through authoritarian regimes. In earlier times, several of the developed economies built their successes on the back of slavery and work practices that would not be tolerated in any democracy today”

“Some may admire the results of razing down whole villages and new structures appearing in weeks, but we have to ask ourselves how much regimentation needed for such things would be tolerated by the Ghanaian psyche. Or dare I ask, where we would fit in our weekend funerals to be able to put in seven-day weeks?” he noted.

“We should be proud of the liberal democratic path we are treading, and unite to make it work. We could, and should be able to bring our people out of poverty and into prosperity faster. But, let us acknowledge that good things are happening in our country, and we are making progress.” he continued.