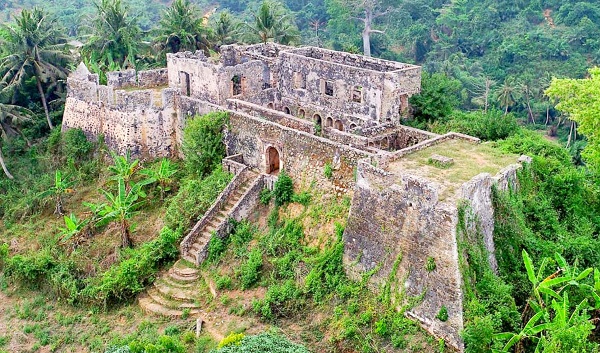 It is ancient and has existed for about four centuries. And we’re told there is something both eerie and striking about abandoned places. Though it appears dilapidated and neglected, it is surrounded by beautiful scenes and a great history, with the potential to woo tourists from all walks of life to experience Ghana. On our Tour Ghana Series, this time we’re taking you to Fort Batenstein at Butre, a small fishing community in the Western Region.

Beatrice Senadju travelled from Axim to Butre where Fort Batenstein is located – A road trip that was smooth at the beginning but became a rather bumpy and dusty one, due to the nature of the road. It was difficult sighting an oncoming vehicle. For safety reasons, all drivers must travel at a snail’s pace.

The team finally landed on the soil. Butre is a fishing community with about one thousand people living here. A stroll through the town reveals the tip of Fort Batenstein on a steep hill. Hiking to the summit to explore Fort Batenstein was daunting due to the slopes and the unfriendly nature of the pathway to the summit. A tour guide becomes essential.

“I was told that the steep hill was the fort’s greatest defence from any imminent attack in the days of old. So we trekked from the valley to the top to uncover the mystery behind Fort Batenstein. The once beautiful edifice has seen better years. And the weather has taken its toll on it. The walls of this old building are crumbling away. It was also obvious that weeds had caused untold damage to the building.”

History books had recorded 1956 as the year Fort Batenstein was constructed by the Dutch for trading purposes. Also from history, though Butre had beautiful ecological views and beaches, the Dutch settled on building the Fort due to a promise of gold to them.

Though the initial intent for building it never materialized, the fort was still useful. Ships underwent repair works using timber from the forest of Ahantaland.

Fort Batenstein is a two-Storey building with ten rooms in all. It had a dining area, a courtyard, a place for baking, a kitchen and a well for water. Though almost half of the building is broken, the people of Butre still cherish this monument.

Even in its poor state, the Tourism Development Committee of Butre tells me tourists from the Netherlands and other parts of the world still visit the site.

Fort Batenstein was acquired in 1872 by the British and implemented a few structural adjustments. The people of Butre believe the number of tourists who visit the town will increase if it is renovated and publicized. They believe a public private partnership is the way to go. They are therefore calling on all to visit the Butre town to learn not only from Fort Batenstein but enjoy other tourist sites within the enclave.