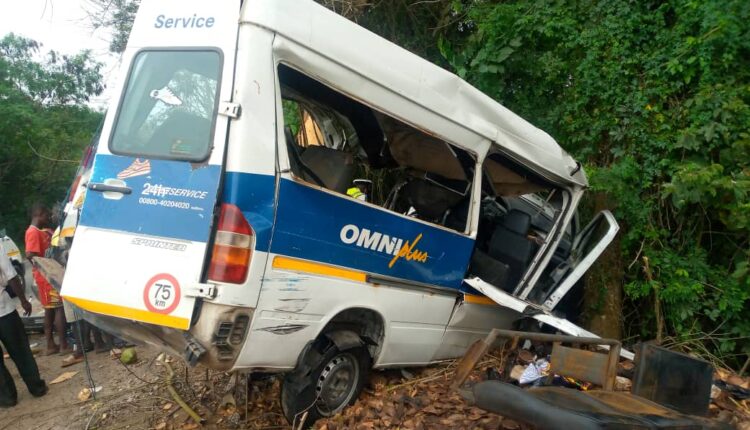 Three people have lost their lives whiles 15 others are in critical condition after a fatal accident at Ekumfi Ekotsi/Bodjuano in the Ekumfi District of the Central Region.

The accident happened on Thursday, January 14, around 4:10 PM when a sprinter bus lost control and crushed a coconut seller who was selling beside the road to death whiles two others in the vehicle died as well.

According to information gathered, the driver of the sprinter bus was suspected to have been sleeping whiles driving.

The report also revealed that the bus after crushing on the coconut seller hit a tree which caused the other two to also lose their lives.

They called on the fire service and on their way to the accident scene their vehicle developed a fault which also took them about two hours before reaching the scene.

Speaking to the media, an eyewitness, Joe Acquah said, the vehicle burst its tyres and made it crushed the coconut seller and hit the tree.

The registration number of the vehicle is GR-6201-21

He said about 15 were injured and were sent to the Saltpond Government Hospital for treatment.

The bodies of the deceased were deposited at the Saltpond Government Hospital Mortuary for preservation and autopsy.