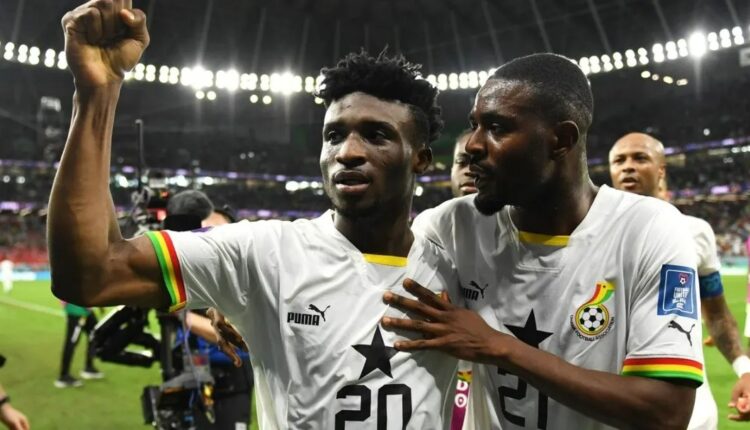 Salisu Mohammed and Kudus Mohammed’s goals were all Ghana needed to beat Korea 3-2 to brighten her qualification chances for the next stage of the FIFA World Cup ongoing in Doha, Qatar.

Salisu, the Southampton defender put Ghana ahead in the 24th minute before Ajax FC’s Kudus doubled the lead with a fine header ten minutes later.

The Tigers of Asia came into the game keen on winning after splitting points with Uruguay in their first Group H encounter last Thursday.

South Korea announced their presence in the game mounting pressure on Ghana, with the defence of Ghana under fire. This resulted in the Asian side picking seven corner kicks within eleven minutes after action.

The Black Stars players reacted and got their rhythm back after 20 minutes of action pushing men forward, however, the team lacked ideas in the opponent’s half.

In the 24th minute, Jordan Ayew took the ball and sent a long-range pass into the Korean’s 18-yard and Salisu was quick to react to a rebound and capitalized on a melee to stab the ball into the back of the net.

The lead boosted the morale of the players and held on to possession and displayed neat passing from player to player.

This yielded results when Jordan Ayew’s close-range cross evaded goalkeeper Kim Seunggu, and Kudus made no mistake to head the ball into the bottom right corner.

From recess, Gue-Sung Cho quickly pulled one back for his side. He headed the ball low into the net beating Ghana’s goalkeeper Lawrence Ati-Zigi in the 58th minute. Three minutes later, Gue-Sung ran onto a brilliant pass from Jin-Su Kim and easily beat the keeper with a header into the middle of the goal from close range to grab his first brace in the tournament.

Seven minutes after Korea’s equalizer, Kudus latched onto a pass inside the penalty box and fired a perfect low strike into the left post to put Ghana in the lead.

Ati-Zigi kept Ghana in the lead after pulling a fantastic save to deny Sang-Ho Na a goal.

After a nerve-wracking 90 minutes of action, walked away with the maximum three points.

It was all joy and excitement on the faces of Ghanaian supporters who thronged the over 40,000-seater capacity stadium.

Kudus was named the man of the match following his stellar performance.