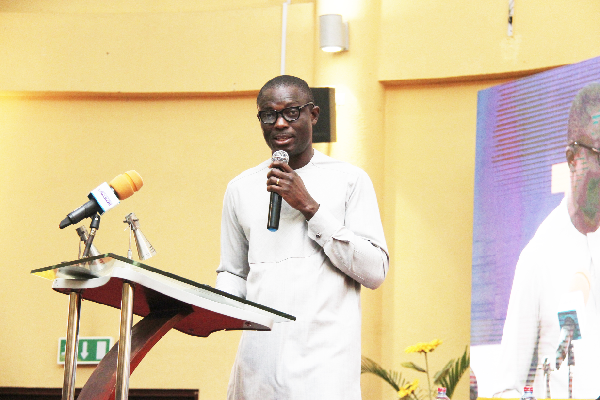 Mr Kwaku Kwarteng, Chairman of the Finance committee of Parliament has appealed to Members to support the government’s policies.

He urged them not to create the impression that the imposition of taxes was against the interest of the people.

According to him, members must partner government in cutting costs and raising revenue, adding that it was not only the Executive that should cut costs but Parliament as well.

“I urge the House to approve the budget and give the House the opportunity to consider the elements within it. If we don’t that by January 1, 2022, and there is no appropriation, public sector workers cannot be paid, the government cannot honour its international obligations and we will throw this country into chaos…Let those saying we should reject the budget repent of what they are thinking about”

Mr Kwaku Kwarteng made the observation when he seconded the motion previously moved by Finance Minister, Ken Ofori-Atta to begin the debate on the 2022 Budget Statement and Economic Policy of Government

He stated that the government through the budget was seeking to deal with a chronic problem that had affected Ghana’s economy for a long time.

He said interest payment on loans from 2006 to 2021 continued to take a chunk of the government’s revenue and was widening the gap between revenues and expenditures.

He cited for example that interest payments on loans between 2006 and 2021 continued to increase and questioned whether the trend was sustainable.

Mr Cassiel Ato Forson, Ranking Member on Finance in his comment described Ghana’s economy as an economy in intensive care unit and sick from what he termed as stagflation with acute debt overhang syndrome known as “sardosis”.

Stagflation is a situation in an economy where is slow and jobless real sector growth that is accompanied by high unemployment and rising inflation.

He said the rising unemployment, inflation, the hikes in fuel prices and slow in the real sector growth among others all pointed to an economy suffering from sardosis.

Mr Forson said as a result of the huge debt overhang, there was the need for government to make critical choices for the country to get out of the difficulties.

He said the budget presented to the House was not realistic because the projected revenue by the government was incredible.

He cited for example that the tax revenue as 30th September 2021 was GH₵37.1billion meaning almost every quarter the country raised GH₵12.3 billion on average per quarter however the government was saying between October to December it would raise an additional GH₵18 billion in tax revenues which was unrealistic.

“Mr Speaker, I say it is unrealistic for the simple reason that on average every quarter we raise GH₵12.3 billion, saying you are going to raise 50 per cent more than what you raise in the quarter…but the evidence before us suggest that revenue increase by 20 per cent in the last quarter” he added.