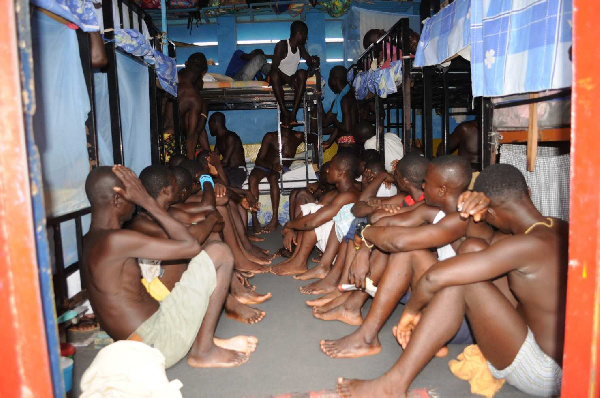 By the end of the year 2020, there were 160 inmates including five females on Ghana’s death row, Amnesty International (AI) Ghana Office has said.

Amnesty International has described death penalty as unfair and discriminatory.

“The Death Penalty violates the right to life as proclaimed in the Universal Declaration of Human Rights.”

It has therefore called for the abolishing of the Death Penalty in Ghana’s statutes as the same constituted torture.

Speaking at a media briefing in Accra on the commemoration of the 19th World Day against Death Penalty 2021, Mr Frank Kwaku Doyi, Director of AI Ghana, noted that Ghana had ratified conventions against torture, hence the need to take the practice out of Ghana’s Statute.

This year’s celebration is themed: “Women and the Death Penalty, an invisible reality”.

Death penalty comes in the form of firing squad, lethal injection, hanging, among others.

Ghana still retains Death Penalty in law and inmates can be executed at any point in time at the signing of a death warrant by the President of the Republic.

The last execution carried out in the country was in the year 1993.

Mr Doyi said the conditions of men and women on death row did not meet international standards, as inmates reported of poor sanitary facilities, isolation, lack of access to medical care, among others.

According to Mr Doyi, appeals were not mandatory in Ghana and the majority of those on death row were unable to appeal against their convictions and death sentence.

He said in Ghana, the death penalty had been imposed mainly as the mandatory punishment for murder, noting that, judges were unable to consider any mitigating factors relating to cases, the circumstances of the offence and the background of defendants at sentencing when they impose death penalty.

Mr Doyi said there were no proof that imposition of death penalty had reduced crime.

“There is no credible evidence to show that the death penalty deters crime more effectively than life imprisonment.

There are examples of countries which maintain the death penalty in their legislation and yet crime rates have remained at high level, for example the United States.

He therefore appealed to the Minister of Justice and Attorney General, Mr Godfred Yeboah Dame, to put into effect the President’s directive to initiate the process of amending the Criminal and Other Offences Act-1960 (Act 29).

The Director of AI further appealed to Mr Alban Sumana K. Bagbin, Speaker of Parliament to support and pass the Private Member Bill currently before Parliament, so that Death Penalty would be remove from the Criminal and other Offences Act.

In his view, Ghana could learn from its fellow West African country, Sierra Leone, whose Parliament unanimously voted in favour of abolition of the Death Penalty in July 2021.

He said AI would mount a continuous campaign on abolishing Death Penalty.

Mr Francis Xavier Sosu, Member of Parliament for Madina Constituency, noted that inmates on death row would need a minimum of GH¢75000 and maximum of GH¢120,000 to file an appeal against death sentence.

Mr Sosu further observed that Forensic Systems in the country were not well developed and some judges could make mistakes when sentences were passed.

Mr Samuel Agbotsey, Campaign and Fundraising Coordinator, AI Ghana, said it was important that the debate on the abolishing of Death Penalty was not done partisan lines.

He said AI had gone to the aid of a woman on death row and his organization would assist her to file appeal against her sentence.

Mr Agbotsey said this year’s celebration focus on women, because they suffered a lot of domestic violence on the quiet and unable to mount good defence when they were held for an offence.

In June this year, Mr Sosu introduced a Private Member Bill to remove the Death Penalty from the Criminal and other Offences Act -1960 (Act 29).

If adopted and signed into law, the law would abolish the Death Penalty for most offences.